on April 14, 2011
A short time ago, I sought out a restaurant that claims to be the winner of "Seattle’s Best Breakfast Award." Maybe. Or maybe not.

Patty’s Eggnest & Turkey House in Mill Creek definitely presents a good breakfast, at least based on my sole visit.

The chicken fried steak was exactly as it should have been: crispy on the outside, tender on the inside, with lots of spice and covered in gravy. The scrambled eggs were generous, the hash browns (like the steak) crispy outside and tender inside, and the thick-cut rye toast was a great additional touch. 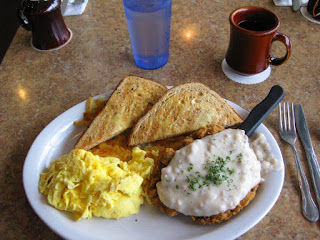 Patty’s, though, did have some negatives to note.

First, this location is brand new, about a mile from the original location on 164th St. While the restaurant is clean and shiny, large columns that define the booths also make it difficult for the staff in the front of the house to see when a diner has finished looking at his/her menu and is ready to order, or is trying to wave them down for more coffee. 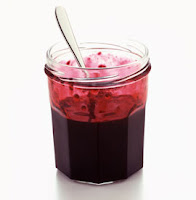 Second, Patty’s provides a pot of strawberry freezer jam on each table like the one at left. I am not a fan of the type of container where the jam, jelly, or whatever is waiting to be spooned out; there’s no telling whether a previous diner may have double-dipped their own spoon in the pot and what cooties they may have left behind in the process. Beyond that, I find strawberry, grape, and the ubiquitous “mixed fruit” jams and jellies rather mundane. But when I asked if they had anything else (like orange marmalade), they told me they did not.

Third, Patty’s coffee is inexcusable. They pour Portland-packaged Boyd’s coffee. No disrespect to the Rose City, but this is Seattle and good coffee is available almost everywhere. Why they didn’t choose a fine, local brand is a mystery. Or maybe they’re deliberately brewing it weak in an attempt to economize. Whatever the reason, the coffee is substandard. 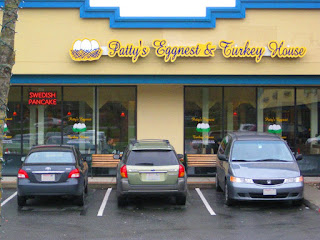 Finally, the service needs to be better. Perhaps the staff is still getting used to a new location, perhaps it’s because I arrived after the big breakfast rush, but I’d describe it as lackluster at best. Not downright inattentive, but it could (and should) have been so much better.

Patty’s Eggnest has eight locations in the Northwest, including the one shown here. I wouldn’t steer people away – I’ll probably stop in and try another location at some point – but I wouldn’t go out of my way, either.