COMMUNIQUE FROM MOSCOW: Getting Around

on March 15, 2011
The dispatches from my traveling companions in Moscow continue. 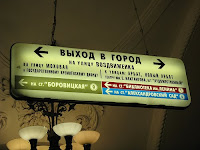 I just navigated my first solo sight-seeing trip on a subway sign-posted only in Cyrillic. I now have SO much more sympathy for all the millions of folks who visit or move to the US each year and speak a language with a different alphabet.

The Moscow Metro opened in 1935 and has been called "the mother of all metros." Originally designed as "palaces for the people", many of the stations are architectural masterpieces, heavily themed with sculptures, reliefs and mosaics expounding the benefits of a healthy Communist life, including many images of soldiers, workers, tractor drivers, artists and sportsmen. Some Metro stations are quite deep and had been planned to have an alternate use: bomb shelters.

Though her experience thus far has been limited, my traveling companion concurred: The stations are impressive. I have yet to see some of the coolest ones...planning a tour later this week.

A friend responded with a bit of advice for an alternative mode of transportation:

Just make sure you are with a guy if you use the "unofficial" taxi system. A random car will stop if you look like you need a ride & you can negotiate a fare. I paid the same price in Moscow for a ride in a super-old Soviet Flintstones car as I did a brand new Volvo.

Travel web sites make the point that fares will vary, even among legitimate taxi companies in Moscow. The general rule is: the nicer the car, the higher the fare and vice versa. But, as we all know, to every rule there is an exception.