on June 08, 2010
Just because a restaurant is featured on television, it does not necessarily mean it's worth your time. In my estimation, that's true of Voula's Offshore Cafe'.

We sought out this local place because it was featured on Food Network's Diners, Drive-ins, and Dives. It makes the most of that 15 minutes of fame, with the Food Network logo now gracing its sign and "Guy's Favorites" featured on the menus.

Maybe it's because we went our own way instead of Guy's, but we weren't impressed by either the food or the service.

We went about 10 a.m. on a Tuesday morning, well after the breakfast rush. The place still had a friendly vibe and a distinct buzz, but not too crazy. Our waitress brought menus and offered coffee as soon as we chose our seats (which is what you do at Voula's) and popped back soon after to take our order.

Though there were fewer than 20 people in the place, it took far too long to get our breakfasts...and when they came, we were underwhelmed. 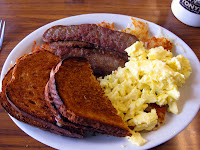 My breakfast -- two eggs, three Greek sausages, hashbrowns, and toast -- was OK, but no better than that. The hash browns -- a huge portion, crispy on the outside, steaming on the inside -- were the star. Scrambled eggs were done in far too much butter. The Greek "sausages" were actually slices of sausage that tasted far too much like the scrapple I'd sampled while in the south.

My wife had the Naked Hobo, a conglomeration of hash browns, eggs, cheese, tomatoes, mushrooms, and onions. Despite the ingredients, it was almost devoid of flavor and was also done with far too much butter. 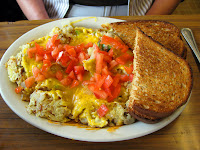 Despite it being located in Seattle, the coffee was an off-brand I'd never tasted before and don't care to again. It was pretty close to what my wife and I call "church coffee" -- the dishwater-like brew served in many church basements and foyers.

Finally, there was the lackluster service. Perhaps our waitress had spent all her energy on the breakfast rush and nothing left for us, but it was so poor I only left a 15% tip -- well below my standard 20% tip, especially at breakfast.

RECOMMENDATION: Don't go out of your way to find Voula's; there are many better breakfast places in Seattle.