One rainy Sunday (yes, there are sunny Sundays in Portland!), our daughter led my wife and me to Hash. What a delightful discovery!

Hash is the type of small, neighborhood restaurant for which Portland is famous. Located in the Sellwood area of southeast Portland, it offers a small menu of creative items that are deliciously prepared. Both small plates and large plates are offered, making it a great place whether you're in the mood for a full meal or simply a snack.

Our daughter and I started with what they called "Candied Ginger Bellinis" which, upon further questioning, our server admitted was simply sparkling wine infused with candied ginger and not a true Bellini made with fruit juice. Regardless, they were delicious! The ginger, despite being candied, offset some of the sweetness of the sparkling wine, added notes of its own, and gave a pleasant, gingery bite at the back of the throat. I was hard to stop at just one. 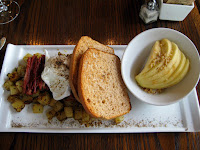 Daughter ordered the restaurant's namesake: hash. It would more accurately be described as "deconstructed" hash, as shredded corned beef was placed atop a mound of potatoes laced with onions, green peppers, and spices. It was excellent, if not exactly what one would expect from the name. 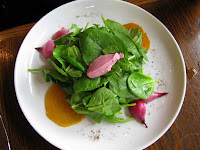 My wife had the roasted beet salad with baby spinach, pearl onions, chevre, and sherry vinaigrette. Also delicious! (I opted to sample their items instead of ordering my own entree.) The food is made to order, which meant a bit of a wait, but the freshness of the fare made it well worthwhile.

The service is best described as casual. We were seated and provided with menus promptly; orders for both drinks and food were taken quickly as well. It appeared that many of the staff knew many of the regular customers and spent a fair bit of time chatting with them, but responded promptly with a simple wave.

RECOMMENDATION: Worth seeking out.