on December 08, 2009
Sacramento is home to many noteworthy places: the State Capitol, the California State Railway Museum, Old Town Sacramento, the Tower Bridge, the Crocker Art Gallery, and the home of “The Best Burger in Town” – an 11-stool “dive” called the Squeeze Inn.

I lived in Sacramento for 10 years and must have driven past the Squeeze Inn at least once a week but didn’t realize it was a restaurant until Guy Fieri featured it on his Food Network show Diners, Drive-Ins, and Dives. Judging from its tucked-away location and the name, I concluded it was a bar – and probably a dive bar – that was just boasting about its burgers. 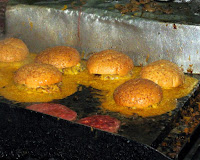 The Squeeze Inn is 100% restaurant. Its signature creation is the SqueezeBurgerWithCheese: a 1/3 pound hamburger covered with an equal amount of shredded cheddar cheese, then steam-grilled to create a cheese “skirt” around the burger. Talk about a heart attack on a plate – but worth it!

And worth the wait.

On the Monday following Thanksgiving, my wife and I drove to the restaurant on Fruitridge Road just west of Power Inn Road and, to our delight, found the line barely extended out the front door. The line has been known to snake down the front sidewalk with waits that exceed an hour; it’s that popular and its followers are that loyal! 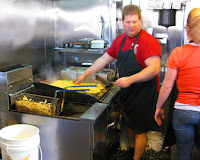 But on the day of our visit, we only waited about 15 minutes to place our order, then sat at the counter watching the show for another 10 minutes before our burgers arrived.

Of course they were delicious! They were thoroughly cooked but still juicy. And the crispy cheese skirt was, I’ll admit, just plain fun.

The fries were equally good: crisp and hot. They’re fanatics about freshness at the Squeeze Inn. I watched one of the kitchen crew throw out at least two orders’ worth of fries because, in her estimation, they’d sat in the pan too long and were no longer hot enough. Good for them!

Perhaps because of the publicity it has received – most recently on Jay Leno’s show when Guy Fieri called their burgers one of the two best in the country – the Squeeze Inn recently became the target of a lawsuit by a woman who claimed the restaurant violated her rights under the Americans with Disabilities Act. The suit was later dropped, but the publicity and the potential closing of this hot spot resulted in people flocking to its door.

Click on photos to view larger size.
Visit my main page at TheTravelPro.us for more news, reviews, and personal observations on the world of upmarket travel.