on July 31, 2015
Next time you're at an airport or on an airplane, stop to listen and you'll hear some of the most ridiculous uses of the English language.

For example, I overheard a man standing at the ticket counter as the agent rebooked his flight. As he received his new ticket, he asked a telling question.

Doesn't that contradict the notion of "frequent" flier? 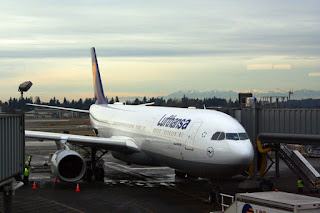 A few moments later, a gate agent said, "Once again, ladies and gentlemen, this is the FINAL BOARDING ANNOUNCEMENT for Flight..."

Apparently, he was just teasing when he said the previous announcement was the "final" announcement.

Aboard the plane, the flight attendants said, "We have an EXTREMELY full flight today." The term “full” is an absolute; either a container has additional capacity or it does not. If every seat will be occupied, the plane is simply “full,” or perhaps "completely full" for emphasis.

Sure, you can OVER-fill something, but that means something is spilling out of the container. I have yet to be on a flight where a passenger occupies one of the overhead luggage bins or where more than one person is stuffed into a seat (though I’ve occasionally felt like it).

Flight attendants often announce that the plane will be taking off or landing “momentarily.” “Momentarily” means “FOR a moment,” so using "momentarily" in this situation implies that the plane is either going to take off then land in short order, or perhaps that the pilot intends to practice touch-and-go landings. The term for which they’re grasping is “in a moment.”

Toward the end of the flight, I’ve heard them announce that the captain has turned on the seat belt sign and that passengers must remain in their seats “for the duration of the flight.” The word “duration” means “the length of.” As the majority of the flight has already passed, they mean – and should say – the “remainder” of the flight.

It's amazing how often our language is misused and abused.