During a recent vacation that included several stops in the South, we enjoyed the Savor the Flavors Tour of Downtown Charleston. Offered by Bulldog Tours, we found it to be an excellent introduction to many traditional Southern dishes.

Although clearly presented as a “2.5 hour walking tour,” it was less physically demanding than its length might imply. Charleston is pretty flat (though the historic sidewalks are often uneven and can be a bit of a challenge). There was plenty of time at each of the five stops to relax, enjoy the offerings, and get to know a little about your fellow foodies.
Our guide, Tom, was a retired attorney and very knowledgeable about food, Charleston history, and trivia in general. An excellent ambassador for Charleston and its food scene, he not only told us about the food we were tasting, he gladly recommended other local restaurants in the downtown scene as we toured.
We started with two different varieties of biscuits from an establishment named Handy & Hot. Each of the 12 guests was provided two biscuit sandwiches: a fontina florentina with spinach, tomato and caramelized onions, and a country ham and cheddar biscuit with apple preserves and white cheddar, along with a lemonade. Let the noshing begin!
Next, it was chocolate treats at Christophe Artisan Chocolatier. A truffle, a peanut butter macaron and a cold coffee and chocolate beverage whet our appetites; many of us bought extra treats from the small but well-stocked shop. Goodies were almost too pretty to eat!
On to The Oyster House for a return to the savory; she-crab soup, pimento cheese and hush puppies. If you cook or even simply enjoy food, it probably comes as no surprise that there are as many variations on any given dish as there are cooks preparing it. That was our revelation regarding Southern staples she-crab soup, shrimp and grits, and pimento cheese. The Oyster House versions of all three were flavorful, but milder and more understated than others we would try. 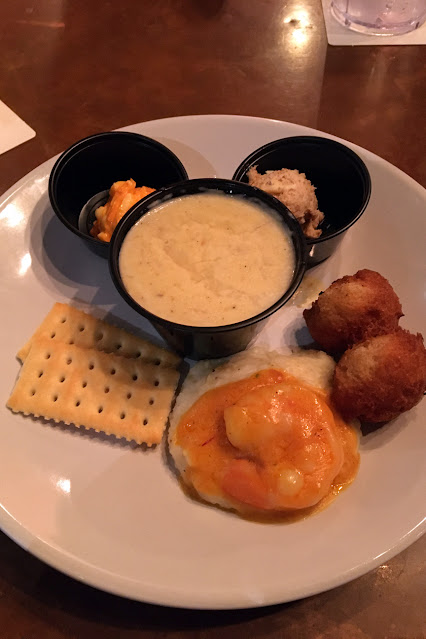 The next stop, The Spice and Tea Exchange, was a bit of a diversion. The shop offers a wide array of spices and spice blends, and offered samples of several, sprinkled on oyster crackers, saltines and popcorn.

Our tour wrapped up with pulled pork sliders and collard greens at Poogan's Smokehouse. They were served with a selection of vinegar-based as well as tomato-based barbecue sauces representative of the region’s offerings. The sliders were very tender but the collard greens stole the show: tender, tangy, with just the right amount of heat, though additional heat in the form of bottled hot sauce was available for those who wanted it. 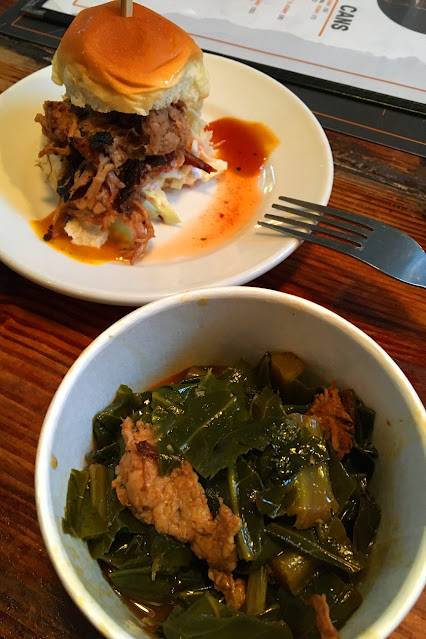 There were a couple of stops where guests could indulge in an adult beverage if they were of a mind, and several of us were, though we waited until our last stop before tucking in. (The tour is not recommended for children under 14).

All in all, we found it an enjoyable afternoon getting to know a bit about low county food and Charleston history. Highly recommended.