Savannah, Georgia – A Taste of the South

on March 03, 2022
By Carl and Jamie Dombek
After sampling Southern cuisine on a food tour in Charleston, South Carolina, we headed farther south -- to Savannah, Georgia – for the First Squares Food Tour operated by Savannah Taste Experience. We expected some similarities, but it was the differences that took us by surprise.
We have enjoyed several taste tours, and although it’s always fun to taste new foods and get recommendations for local restaurants and shops, in our experience the tour guides themselves are essential to a good tour experience. Josh and Jordan’s enthusiasm about Savannah’s history and food made this tour one of our favorites to date.

The name of the tour hints at the origins of Savannah. Unlike many cities that simply sprang up near sources of food, water and commerce like the Savannah River, Savannah was actually planned before building began and is known as America’s first planned city. 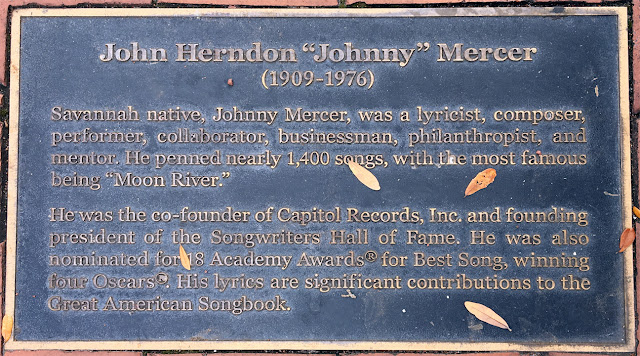 Colonial General James Edward Oglethorpe laid out the city in a grid pattern, including squares that served as town meeting places and centers of business. The town originally had 24 squares; 22 are still in existence according to VisitSavannah.com. The oldest, Ellis Square, is also home to a statue and plaque honoring native son and famous songwriter Johnny Mercer. 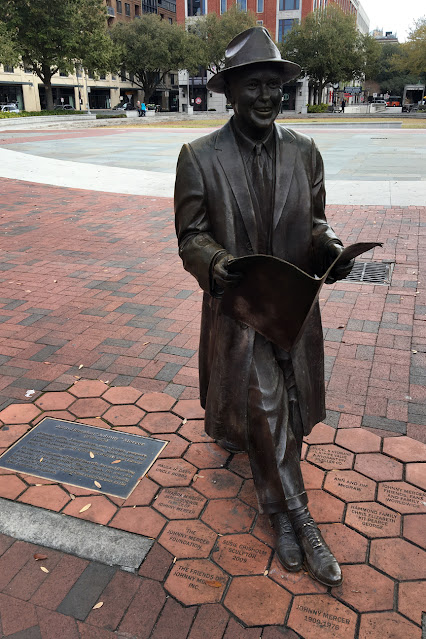 Presented as a “3 hour walking tour,” it was less physically demanding than its length might imply. Josh and Jordan explained we’d be walking about a mile total, so it was very do-able for all of us, most of whom would qualify for a senior discount. 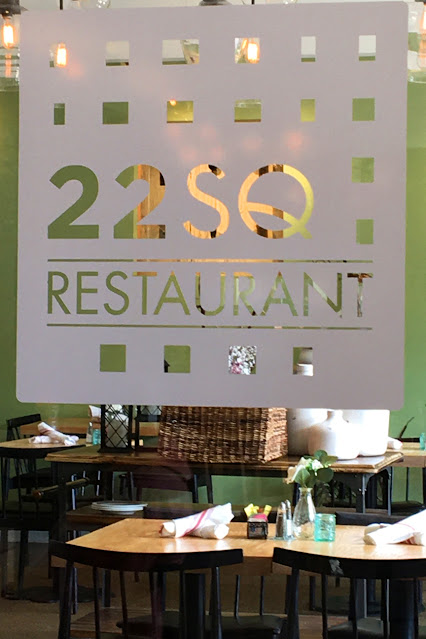 We started at the 22 Square Restaurant inside the Andaz Hotel located just off Ellis Square near City Market. There, we sampled the chef’s take on the Southern staple shrimp and grits. Our guides explained that the chef took a different approach than many. He used local grits simmered in broth instead of water for about 1.5 hours instead of the much shorter times that are more typical, making the grits creamier and imparting more flavor. The chef also added a bit of braised pork belly and melted leeks, which gave the sauce a much fuller flavor profile than other versions we had tried.
From there, we walked to the riverfront for a stop at The River House, where we would sample their take on she-crab soup and have the option of sampling Chatham Artillery Punch, an alcoholic concoction of uncertain origins that is today one of Savannah’s most noted drinks.

The River House’s she-crab soup is spiced with smoked paprika, giving it both more flavor and a deeper red color. It is Carl’s favorite version of the soup thus far.

As to the adult beverage, legend has it that “gentle ladies” associated with the Chatham Artillery made up the first batch of Chatham Artillery Punch in a horse trough. Their creation was then augmented by officers who, one by one, added whatever they had on hand. Today’s recipe includes a mixture of Catawba wine, rum, gin, brandy, Benedictine, rye whiskey, strong tea, brown sugar, orange and lemon juice, then allowed to steep for 36 to 48 hours before being mixed with champagne and served.

Upon departing The River House, the tour took an unexpected departure from “traditional” Southern cuisine. We started exploring the foods that were brought to the area by the immigrants who arrived over the centuries.

At The Little Crown, we sampled an English sausage roll, served inside a fairly authentic recreation of an English pub. Hot sausage surrounded by flakey crust, it was delicious. The only thing missing was a bottle of HP Sauce. It was definitely NOT something we expected to find on a tour of “Southern” cuisine!

From there, it was on to the Prohibition Museum and bar to sample – what else? – bar food. Nibbles included boiled peanuts, deviled egg, pickled veggies and a wedge of pimento cheese sandwich. Afterward, we strolled the museum and took in a little history about the 18th and 21st Amendments, heard the lore about how NASCAR actually has its roots in rum running, and learned the supposed origin of the term, “The Real McCoy.” Much of that “information” was taken with a grain or several of salt, but it was certainly entertaining.

Returning to the food the immigrants brought, we then wended our way to a Scottish pub and grill by the name Molly McPherson's, where we were served samples of Shepherd’s Pie. While ground beef-based, the seasonings definitely elevated it above its basic ingredients of beef and potatoes. It’s a good thing Carl didn’t realize the extent of the bar’s scotch inventory or the tour might have ended right there, at least for us!

Our final stop was the original Savannah Bee Company where we compared and contrasted various types of honey, and sampled an amuse bouche of thinly sliced Granny Smith apple topped with a fruit compote, cheese and a dollop of honey. We also had the opportunity to order the honey-based alcoholic beverage called “mead.” The tastiest part of this stop was learning more about beekeeping and honey, and about the local man who became an expert and whose work influenced beekeeping around the world! Today, the outfit operates 14 stores around the country.
That’s where the formal tour ended, though we returned to the Prohibition Museum for a more extensive look at its exhibits and (of course) the gift shop. From there, we walked back through Savannah’s Market toward our parked car, reflecting on how it is probably true of every city of any size: the food scene is as varied as the population of the area, and how catch-all terms like “Southern cuisine” don’t do any area the justice it is due.

EDITOR'S NOTE: VisitSavannah arranged for us to experience the tour for the purpose of writing about it.