on October 21, 2019
Among the interesting facets of working disaster relief is seeing parts of the country we might otherwise have never visited. So it was with Dodge County, Minnesota.

The disaster I was working centered on the county which is 15 miles west of Rochester, home to the famous Mayo Clinic. Because the county seat of Kasson was fairly small, our quarters were in Rochester, which proved to be a charming town. In August.

I kept reminding myself not to be too charmed until I visited in January. It is, after all, Minnesota!

Most of the guests at my hotel in Rochester were either getting treatment at the Mayo Clinic or visiting someone who was. Business and leisure travelers were few and far between, even during the waning days of summer.

Still, the hotel -- a Homewood Suites -- was very pleasant.  The suites were larger than a studio apartment I lived in for a couple of years, the courtyard had gas-fired barbecue grills where one could do one's own cooking, there was a full-service grocery less than a half-mile away, and a number of good to really good restaurants in town. I'll offer a more complete review tomorrow.

Not as much with Kasson, a town of less than 6,000 and one that serves as something of a bedroom community to the "big city" of Rochester (pop. 115,000). Very nice "salt of the earth" people who made us feel very welcome and who, despite the small town's modest resources, invested in quality-of-life facilities for their residents, including a new splash park which gets about three months' use during one of the area's warmer years.

There's a lot of "rural Minnesota" to be seen while driving between the established cities, which includes Austin, MN, the home of Hormel and therefore, the home of SPAM® and the SPAM® Museum. 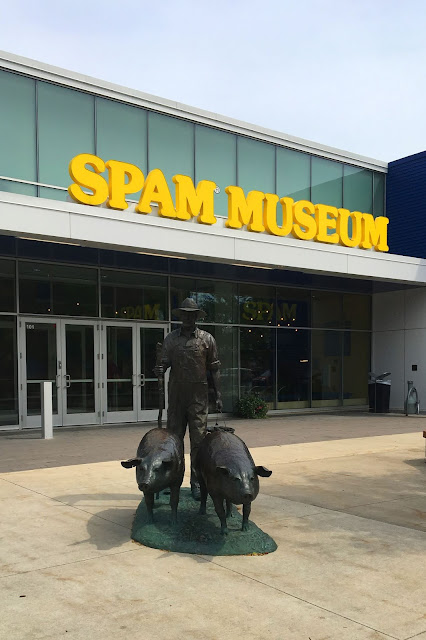 Having visited Honolulu to attend Spam Jam, I HAD to stop in.  Admission is free, and it's a fun, kitschy thing to do, even if it doesn't occupy a place high on your bucket list.

A little farther south and across a state line is the site of the crash that claimed the lives of Buddy Holly, Ritchie Valens and The Big Bopper (J.P. Richardson) on Feb. 3,1959.


The trek to the site, just outside of Clear Lake, Iowa, includes about a half-mile of travel along a dirt road to get to this modest memorial. Then, there is the hobo who has stationed himself next to the memorial and sings his, "Give me a DOLLAR!" song all the livelong day. But hey, at least you've been to the place that inspired Don McLean's song "American Pie" about "The day the music died."

On to Pittsburgh after a review of my Rochester hotel....