Pictures from Warnemünde and Kiel, Germany

on June 03, 2019
During our recent cruise, we visited several cites on the Baltic Sea, including two small port cities in Germany that are considered gateways to major inland cities. Rather than make lengthy treks, we chose to see what those smaller towns had to offer.

Warnemünde and nearby Rostock are port cities on the Baltic and considered gateways to Berlin. And while the former East German capital is on our bucket list, visiting during our cruise would have meant a lot of time on the train for just a few hours in the city.

Fortunately, we were able to connect with Dave, an ex-pat American who has adopted Warnemünde as his home and runs the tour company Friends of Dave Tours.


Our first stop was the visitors' center at the port. Public art is a big deal in Warnemünde, and the entries into a recently concluded sand sculpture contest were still on display. Like the one above, they played into the area's maritime heritage.


The city center is just 300 meters from the visitors' center and terminal where many cruise ships dock, making it a nice alternative for those not inclined to go father afield. That short walk takes visitors over the Alte Brücke, or old bridge, which spans the Alter Strom, or old stream. The docked fishing vessels attest to an industry that has historically played a large role in the area's livelihood.

Its position on the Baltic makes Warnemünde an attractive destination for an ocean getaway, and Germans have been flocking to its broad beaches and sugary sands for generations. 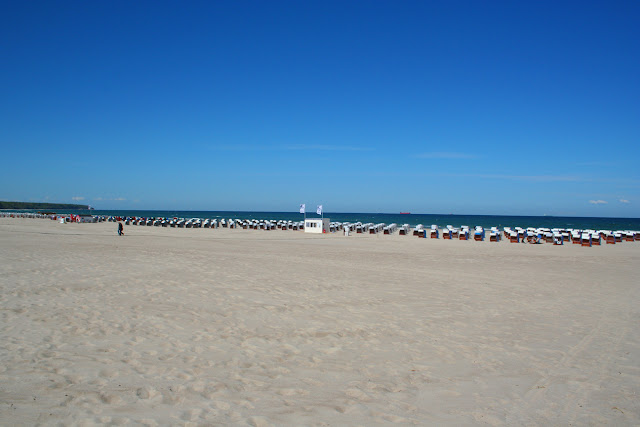 According to our guide, the area to the left of the white building in the center of the photo is the "clothing optional" area, while more modest folks stay on the right.


Two of Warnemünde's most famous landmarks are pictured below. The Teepott ("Teapot," obviously) was built in the early 1960s and is an interesting example of East German architecture. The lighthouse, which is still in use, was built in 1897.


Next to the beach is a broad sidewalk called the "Seepromende" or lake promenade. The path is dotted with more examples of public art, like the sculpture below, as well as meticulously maintained landscaping.

Many of the city's sights hark back to the period of the Cold War, when Warnemünde was in what was then East Germany. Those included the Hotel NEPTUN, opened in 1971 and built to house visiting diplomats, and the Kurhaus Warnemünde a mere 100 meters east, where Stasi officials listened to the diplomats' discussions via the bugs planted in each and every guest room at the Neptun.

Heading away from the beach into the center of town -- a walk of less than 700 meters -- we were taken by its charm.  In many cities, a church sits at its spiritual, if not geographic, center and Warnemünde is no exception.  The Kirchengemeinde Warnemünde is an Evangelical Lutheran church that, despite its classic design, is only about 100 years old.


One of the things I enjoy most about traveling is living and eating like a local, which means avoiding chain restaurants and seeking out local haunts.  Fortunately, Dave introduced us to the woman who, along with her husband, runs the DeJa.bo weinhandlung, or wine shop, just 200 meters west of the church, at Mühlenstraße 24. In addition to offering wine by the glass or bottle, they also put up a very nice charcuterie plate, which we enjoyed for our lunch.


About 200 meters west of DeJa.bo, visitors can see the 1866-vintage mill called Meyers Mühle. While the windmill is a picturesque landmark, the restaurant it used to house has closed permanently. 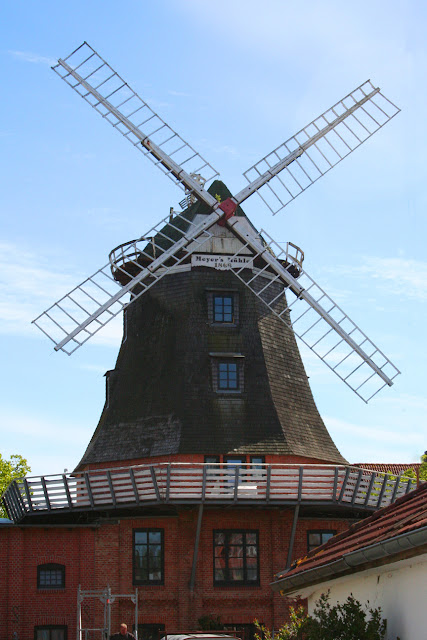 Our last port of call was Kiel, the gateway to Hamburg. With a short day in port, we again chose not to venture out but to see what Kiel had to offer.

It is a smaller, less picturesque town that Warnemünde, though it does have historic buildings, beautiful churches, a shopping district in the Alter Markt, or old market, and numerous parks and lakes.

Public art is abundant here, as in Warnemünde, and includes this statue near the church above. 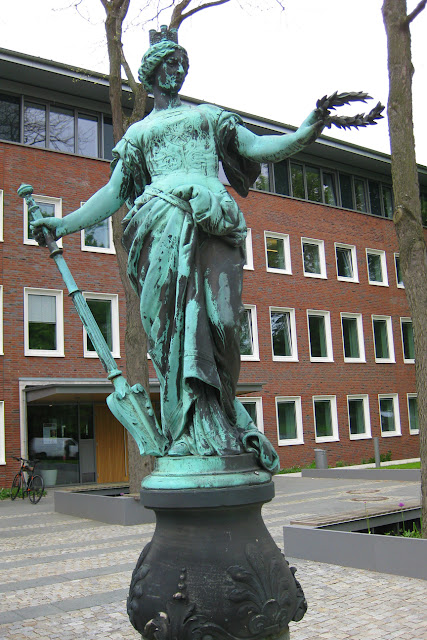 In the Old City, Kiel's historical charm and modern day shopping opportunities stand side by side. From traditional family owned businesses to small boutique and stores to a wide selection of restaurants, coffee shops, bars and entertainment, Kiel's Old City has much to offer.