on May 01, 2019
As the airline industry continues its march to the bottom fueled by ever-increasing ancillary fees, a just-released report shows that the world’s airlines raked in $28.1 billion (yes, with a “B”) last year in baggage fees alone.

The report by the IdeaWorksCompany calls baggage activity “a significant component of ancillary revenue.” No kidding. The $28.1bn estimate accounts for more than 30 percent of the airlines’ estimated $92.9bn in overall ancillary revenue.

While being charged to check a bag makes me furious, I have to be fair: the $28.1bn total includes more than the cost of a size- and weight-compliant checked baggage in the aircraft belly. It also includes added fees for heavy and extra-large bags, and for some airlines, the price charged for larger carry-on bags. But still…

The table below lists the baggage fee policies for 20 top traditional carriers, which just a few years ago would have displayed far less baggage fee activity. In today’s market, only half the airlines listed rely upon the traditional method of including checked baggage as a feature for all fares. 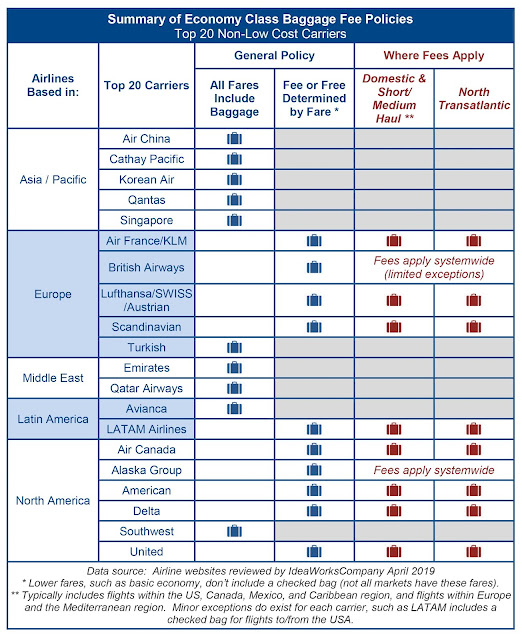 When the airlines in the above table are organized by global region, it is easier to identify policy groupings. The dominance of bag fees in Europe and North America occurs largely due to the presence of a very significant low-cost carrier industry, the report claimed. Elsewhere in the world, traditional airlines include baggage benefits for all fares and have not yet adopted basic economy fare strategies.

To that point, the report highlighted the fact that stringent baggage fee policies are hallmarks of top revenue-performing low cost carriers.

Low-cost carriers have long been the most rapacious in terms of nickel-and-dime charges. In 2017, for example, Spirit (NASDAQ:SAVE) derived more than 46 percent of its annual revenue from ancillary charges, including dynamic pricing of seats, bags, and bundled offerings. Frontier (NASDAQ:FRNT) garnered more than 42 percent of its revenue that year, thanks in part to a 50 percent jump in per-passenger bag revenue over the year before.

Or you can fly Southwest.

Southwest Airlines (NYSE:LUV) stands alone as the only U.S. carrier that provides two included checked bags for every traveler. The airline’s management says the distinction contributes to Southwest’s financial success.

Charging to check a bag is simply ridiculous. When have you ever taken a flight and NOT taken a bag?

Sure, I’ve taken plenty of trips without a checked bag, but I’ve always had some kind of suitcase. And, unless you only take out-and-back-the-same-day trips, so have you. Baggage, therefore, is a necessary part of air travel, and a checked bag ought to be included in the fare.

The trouble with charging to check a bag goes beyond spending more money. The move has resulted in more people relying on carry-ons, lengthening both the boarding and deplaning processes. It has also resulted in more crowded, uncomfortable cabins and grouchier passengers. And tempers tend to flare more easily when one is already crabby.

Further, the offering of “basic” or “no-frills” fares with everything added separately creates a false sense of economy. Sure, the “ticket price” may seem low but if you want to reserve a seat, check a bag, etc., you’ll have to pay more.

To illustrate this principle, I went to Spirit’s website and put in a sample round trip from Seattle-Tacoma International Airport (SEA) to Chicago’s O’Hare International (ORD) leaving May 4 and returning a week later. The standard non-stop round-trip fare quoted was $202.58. By the time I added a package which covered a standard checked bag, standard carry-on bag, the ability to choose your seat, early boarding, no change fees and double frequent flyer miles, the fare had swelled to $355.56.

Choosing seats is another example of something that should be included with the fare. Have you ever taken a flight where you didn’t sit in a seat? No, you haven’t. Charge a premium for more legroom if you must, but let us select our seats without charging us to do so.

Some things should be à la carte. Food and beverage are excellent examples. Others might include in-flight Wi-Fi and even entertainment. Maybe you don’t want or need to be that connected, and most of us have tablets or laptops we can use to provide our own entertainment.

But checked bags? Beyond charges for oversize, overweight, and excess baggage? NO!

Finally, consider this: The report showed baggage fee revenue accounted for slightly more than three percent of global airline revenue. If only half of all carriers are currently charging baggage fees, then if the ones who are charging raised their fares by six percent, that should cover it. And six percent of a $400 ticket is $24, far less than the $30 each way most U.S. carriers charge for a checked bag.

Airlines, listen up: It’s time to stop nickel-and-diming your customers. Stop the shell game of these à la carte pricing schemes and charge what you need to charge. It'll make things simpler for all of us. <RANT ENDS>