on May 29, 2019
During our recent cruise, we visited several cites that abut the Baltic Sea. While the weather was often overcast, the day we called on Tallinn was beautiful. Here are some of the photos from that destination with just a bit of commentary. 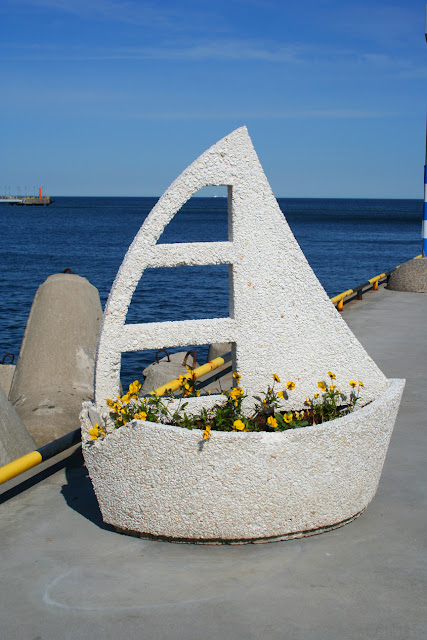 Estonia’s capital, Tallinn is the country’s cultural hub. It retains its walled, cobblestoned Old Town, home to cafes and shops, as well as Kiek in de Kök, a 15th-century defensive tower.


The city's Gothic Town Hall, built in the 13th century and with a 64 meter-high tower, sits in historic Tallinn’s main square. Less than 200 meters away, St. Nicholas Church is a 13th century landmark exhibiting ecclesiastical art.


On the grounds of St. Nicholas Church and Museum is a monument to Eduard Vilde, an Estonian writer, a pioneer of critical realism in Estonian literature, and a diplomat. Author of classics such as The War in Mahtra and The Milkman from Mäeküla, he was one of the most revered figures in Estonian literature and is generally credited as being the country's first professional writer.


Many of the buildings in Tallinn are painted in bright colors that seem more characteristic of the tropics than the Baltic. Locals explained that the focus on color tends to offset the negative effects of the weather, which is often dreary and overcast.


Skoone bastion is the mightiest Baroque fortification building in Tallinn. Located just outside the walls of the Old Town, it is a popular gathering place for locals.


Also just outside the stone walls of Old Town is Towers' Square park. It has an extensive playground, many walking trails, and public art including the fountain named Woman with a Plate.


Quaint and charming, Old Town Tallinn is also very much a 21st century area and boasts establishments such as Gloria Restaurant. Built in 1937 into one of the medieval walls of the city, it has received numerous awards for its cuisine. Sadly, our ship sailed before its 5:30 p.m. opening time, or we'd have much more to report!