Flying high over our beaches

on August 31, 2018
Heading to the beach this Labor Day weekend? Then it will be helpful to know the meaning of those flags flying over the sand.

The North Carolina-based manufacturer Carrot-Top Industries, Inc. has put together a compendium for deciphering the meaning of those colorful swatches of fabric.

While some beach flags warn of imminent danger, a green flag actually signifies that the coast is clear. It means the water is safe from winds, currents, and creepy creatures that can swim faster than you. Good news indeed for beach-goers of all descriptions.

Another piece of flying fabric can be considered a bearer of bad news if you or your kids love inflatables. An orange wind sock signals the direction of offshore winds and indicates where inflatable items should not be used, lest they be blown out to sea.

Outside the U.S., a blue flag with an FEE Logo indicates that the beach meets certain safety, environmental, and quality criterion as determined by the Foundation for Environmental Education (FEE). However, while the foundation has 73 member nations, the United States isn’t one of them. 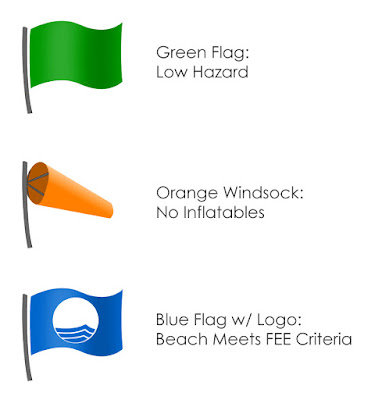 Other flags will be relevant to water sports enthusiasts.

A red-over-yellow flag specifically pertains to those who plan to swim or bodysurf. This flag combo signals that qualified lifeguards are on duty and closely watching those in the water.

A pair of quartered black-and-white flags designate a section of the water for use with only "non-powered" or "human-powered" watercraft such as kayaks or canoes.

A yellow flag with a black ball means surfboards and other non-powered watercraft have been “black-balled” and are not permitted at that location.

A half-white, half-blue flag with a cutout on the blue section means diving is in session.

The newest flag in this group is a flag with a red-and-yellow circle and a black whale tail. The Whale Warning Flag was introduced in May 2018 in the Pacific Northwest and advises boaters, kayakers, and anyone else in the water that whales are in the area. Humans need to keep their distance, as required by federal law. 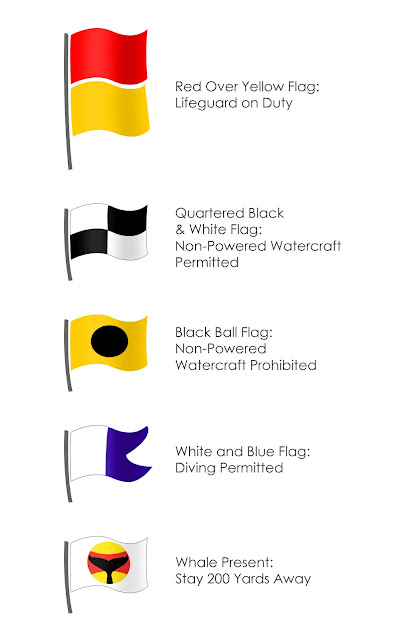 Not such a ‘great day at the beach’

A yellow flag is especially important to weak swimmers, as it indicates a mid-level hazard of moderate currents and/or surf. A purple or dark blue flag means your time in the water should probably come to an end because potentially dangerous marine life is present. While it does not indicate the presence of sharks, things like sea snakes, stingrays, jellyfish, and even sea lice can also quickly ruin your weekend. 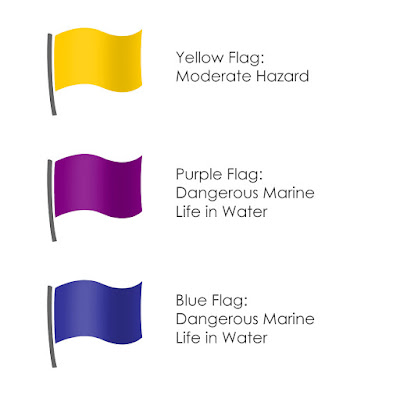 A single red flag means the current and/or surf is too strong for anyone to enter the water. A double red flag is an order to evacuate the beach. A red pennant flag means winds of at least 38 miles an hour are causing hazardous conditions for small watercraft. FYI, it is also raised when ice is present and potentially dangerous. A double red pennant means “gale force” winds of between 39 and 54 miles per hour.

Information for this article comes from Carrot-Top Industries, Inc., which has been a leader in manufacturing patriotic, special event, and custom-made products, including flags, since 1980.

Have a great weekend at the beach, and don’t forget the sunscreen!