on August 16, 2018
Roughly half of airline loyalty program members do not understand how to earn or redeem their points or miles, according to the just-released J.D. Power 2018 Airline Loyalty Program Satisfaction Study.

That’s bad news for the airlines because understanding how to redeem and earn rewards are among the most powerful drivers of customer satisfaction with airline loyalty programs.

“Airlines have worked hard over the past several years to demonstrate the value of their loyalty programs, particularly to general members,” Michael Taylor, Travel Practice Lead at J.D. Power, said. “While those efforts are paying off in the form of improved overall satisfaction scores, airlines have a huge opportunity to improve when it comes to customers’ ease of understanding the rewards program.”

The 2018 Airline Loyalty Program Satisfaction Study surveyed over 3,000 airline loyalty program members, and measured their satisfaction with airline rewards and loyalty programs based on four factors. In order of importance, they were: earning and redeeming rewards; program benefits; account management; and member communication.

Other carriers that can boast of satisfied members include Southwest Airlines (NYSE:LUV), whose Rapid Rewards program ranked second with 798 points and Alaska Airlines (NYSE:ALK), whose Mileage Plan ranked third at 791 points. 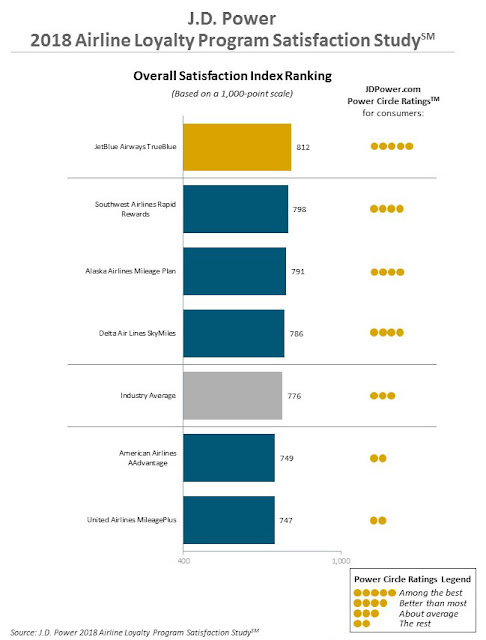 The study uncovered some key findings that airlines would do well to embrace if they want to enhance customer satisfaction with their programs.