on June 28, 2017
Seattle-headquartered Alaska Airlines has added a specially themed plane to its fleet to mark the 40th anniversary of the Seattle Mariners as well as the two entities’ long-standing partnership.

The plane, a specially marked Boeing (NYSE:BA) 737-800, features the Seattle Mariners logo and the 40th anniversary design across the fuselage. The official hashtag of the Mariners-Alaska partnership, #MyOhMariners, appears next to the boarding door. Guests seated over the wings will be able to see the hashtag on the plane's winglets. 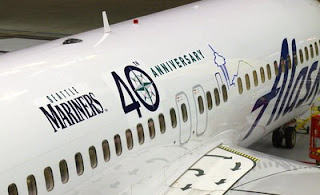 Tilden also threw out the first pitch at the Mariners’ home game on June 28.

"Displaying our 40th anniversary logo on one of Alaska's planes and having Alaska's CEO throw out the first pitch at the game today are meaningful ways to commemorate our long-standing partnership," Kevin Mather, president and COO of the Seattle Mariners, said.

Both organizations are dedicated to helping communities in Seattle and around the world.

For every home run hit by a Mariners player during the 2017 season Alaska will donate 10,000 airline miles to the Seattle chapter of the United Negro College Fund (UNCF) to help worthy students succeed in education. Miles donated, which supplement a one-million-mile seed gift from Alaska, will help students fly to college tours, travel back and forth between school and home, and participate in a variety of leadership development programs and other programming offered by UNCF.

Since 2016, Alaska has donated more than eight million miles to charities and community projects through the Mariners Care program.

Alaska Airlines, together with Virgin America and its regional partners, flies 40 million guests a year to 118 destinations with an average of 1,200 daily flights across the United States and to Mexico, Canada, Costa Rica and Cuba. With Alaska and Alaska Global Partners, guests can earn and redeem miles on flights to more than 900 destinations worldwide.