on March 21, 2017
Passengers flying to the U.S. on non-stop flights from 10 major airports in the Middle East and North Africa will be required to place their laptops, tablets and other traveling electronics into their checked luggage and will no longer be allowed to have them in the aircraft cabins.

The new rule was prompted by intelligence that terrorists continue to target commercial aviation by smuggling explosives in portable electronic devices. 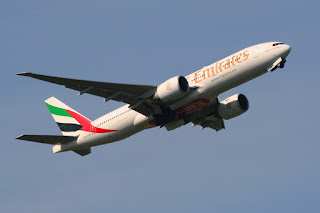 According to a Washington Post report, a person familiar with the security warning said the government has long been concerned about the aspirations of a Syria-based terrorist group to build explosive devices hidden inside electronics in a way that would be hard to detect. Another source said recent intelligence suggested terrorists had gotten further along in developing such hidden explosives.

Airlines have 96 hours to comply with the restrictions or risk losing their authorization to operate in the United States. Depending on how promptly the affected airlines implement the restrictions, it could mean they would not be in place before Wednesday's meeting of the U.S.-led coalition against the Islamic State group in Washington, D.C. A number of top Arab officials were expected to attend the State Department gathering..

While the ban is being described as indefinite, a spokesman for the Department of Homeland Security said the directive runs until Oct. 14 and could be extended for another year should the evaluation of the threat remain the same.

The ban, which requires that electronics larger than a cellphone be packed in checked luggage, applies to nonstop flights to the U.S. from 10 international airports: 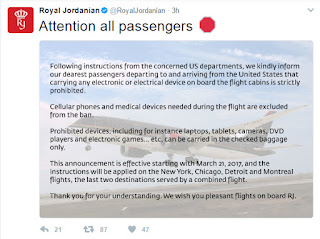 The first hint of the ban came Monday morning when Royal Jordanian Airlines, the flag carrier airline of the Hashemite Kingdom of Jordan, issued a Tweet that it would prohibit virtually all in-flight electronics for flights bound for North America starting March 21, including laptops, tablets, DVD players and even cameras. The only exceptions are cell phones and necessary medical devices.

Within a few hours, the carrier had taken down its original Tweet and replaced it with one that indicated "Further updates will be announced soon regarding #electronicsban."