on February 15, 2017
Japan’s All Nippon Airways (ANA) will launch the fifteenth phase of its “Tastes of Japan” campaign in March to highlight the cuisine of three more of the country’s prefectures.

The airline launched its campaign in September 2013 to introduce regional beverages and cuisine to ANA flights, airport lounges and other venues to raise the profile of Japan’s lesser-known prefectures, particularly to overseas customers, and drive tourism to Japan. The 13th and latest phase of the project, which will run from September through November, will introduce ANA customers to products from Akita, Saitama and Shimane prefectures. 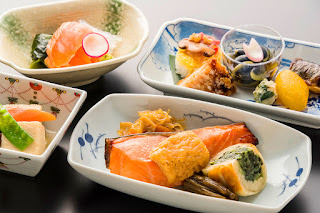 The airline will offer its International Business Class passengers the local main dish of “Shinshu Salmon,” signature seafood from Nagano Prefecture esteemed for its fine fleshy texture and melt-in-your-mouth tenderness. It will be accompanied by pickled turnip leaves as yet another Nagano forte.

Served during March at “Dining h” restaurant within the ANA Suite Lounge at Haneda Airport (HND), will be “Shinshu Beef Round Steak.” For this gourmet creation, choice thigh meat from Nagano-grown beef is meticulously broiled to the guest's request, for enjoyment with Hamami Salt harvested in the waters off Tsushima Island in Nagasaki Prefecture and soy-based Japanese-style sauce. 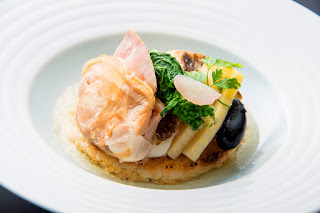 During March, “Dining h” restaurant presents a masterpiece of clams and cherry bass caught in the Sea of Kashima on the Pacific Ocean side of Japan, steamed in white wine and served on crispy scorched rice.

Hearty slices of clam are steamed in wine to yield a rich soup stock, which is then immaculately mixed with bonito broth. The scorched rice base is piled with tender morsels of salt-broiled cherry bass and further enhanced with the luscious savor of the clam broth.

For the airline's International Business Class passengers, ANA will offer a pairing of stewed smelt and potato jelly paste. The smelt is caught in Lake Kasumigaura of Ibaraki Prefecture, waters famed for smelt, and then stewed to a sugary finish. The Ibaraki district is also where the Beniazuma brand of sweet potatoes are farmed. Beniazuma sweet potatoes area used to concoct the jellied paste, and their pure and rustic flavor delivers a restrained sweetness to the dish. 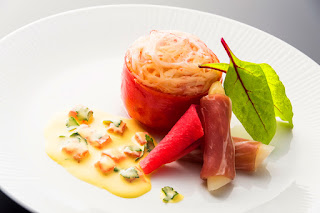 From March through May, the airline's International First Class passengers will be offered the combination of Kochi Prefecture grown tomatoes stuffed with red paprika mousse, and white asparagus wrapped in ham imported from Parma, Italy.

Sweet fruit tomatoes, a Kochi specialty, are hollowed out as vessels to hold the paprika mousse. The accompanying Parma ham-wrapped white asparagus further transforms this into a selection steeped in the refreshing hues and sensations of spring.

Additionally, First Class travelers will also be served Hinohikari, a nationally celebrated brand of rice from the paddies of Shimanto Town in Kochi.

Airport Lounges: Japanese Sake Corner
As part of the project, ANA customers are also able to sample Japanese sake, shochu and awamori, the 'Kokushu' or national spirits of Japan, at ANA airport lounges in HND, NRT and Kansai International Airport (KIX) in Osaka. More information on the featured prefectures is available on a special website dedicated to the Taste of Japan campaign.