Least and most expensive cities for Christmas travel and shopping

The cost of Christmas around the world


Having just returned from visiting four of Germany’s Christkindlmarkts where we did a fair bit of our Christmas shopping, I was quite intrigued to see this list of the least – and most – expensive cities to visit and in which to shop at this time of year.

The index is comprised of two sections. The first compares the “Cost of a Christmassy Day” in each of the locations, calculating how much consumers and visitors pay for festive experiences such as a traditional Christmas meal and a ticket to see a seasonal favorite play, The Nutcracker. The second section, “Santa’s Price Index” compares the price of gifts for an average family to determine the most affordable cities for Christmas shopping.

Finally, the two figures are totaled to provide an all-in, per-person cost for each of the cities.

“Whether you’re travelling to see relatives this year, thinking of taking your family on a festive holiday or simply curious, The Christmas Price Index provides fascinating insight into the economics of the holiday season around the world,” Oliver Dlouhy, CEO of Kiwi.com, said in a statement accompanying the results. 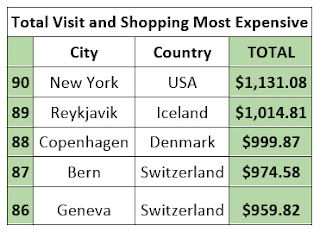 Researchers calculated the Cost of a Christmassy Day by combining the per-person price of one night's accommodation including breakfast, a local traditional lunch, a two-course Christmas dinner, a typical holiday drink, and tickets to see The Nutcracker. Santa’s Price Index compared the cost of a bottle of men’s fragrance, a women’s perfume, a Princess Barbie and a LEGO Star Wars Millennium Falcon.

Perhaps unsurprisingly, the world’s most expensive city overall was New York, at $1,131.08 per person. Reykjavik, Iceland was second, followed by Copenhagen, Denmark. Bern and Geneva, Switzerland, respectively, rounded out the top five.

On the other end of the spectrum, the most affordable city overall was Bratislava, Slovakia. At the equivalent of US$521.04, a day spent reveling and shopping in the home of Georg and Yortuk Festrunk costs less than half of what it cost in New York City. Kiev, Ukraine was second most-affordable city followed by Seville, Spain; Cape Town, South Africa and Kuala Lumpur, Malaysia.

The index reveals some interesting contradictions. While Jakarta, Indonesia is the third most affordable city to visit, it is also the location with the highest shopping prices. One night’s accommodations with breakfast in Jakarta was the equivalent of US$167.43, while the cost of the gifts on the list came to US$568.49. 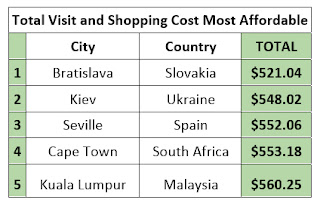 The index also showed that the other four most expensive shopping cities were scattered around the globe: Buenos Aires, Argentina; Rio de Janeiro, Brazil; Reykjavik, Iceland; and Shanghai, China. However, the five most affordable were all in the United Kingdom: Belfast, London (surprisingly), Manchester, Lincoln and Brighton.

The United Kingdom’s favorable position in the ranking can be explained by the largely depreciating Pound Sterling over the past year, the index’s authors noted.

Other findings from the Cost of a Christmassy Day:
“We found The Nutcracker results especially interesting, and were amazed to see the show featured in so many cities worldwide,” Dlouhy said.

There were also some interesting findings in Santa’s Price Index:
Officials at Kiwi.com hope their research inspires more travelers experience their much-loved Christmas pastimes in a brand new destination, wherever may suit their budget, the company said.