on November 02, 2016
Thanks in part to more Americans taking driving vacations during the summer of 2016, the consumption of U.S. finished motor gasoline reached a new record high of 9.7 million barrels per day in June 2016.

That figure, released Nov. 2 by the U.S. Energy Information Administration, surpassed the previous one-month high of 9.6 million barrels per day set in July 2007. 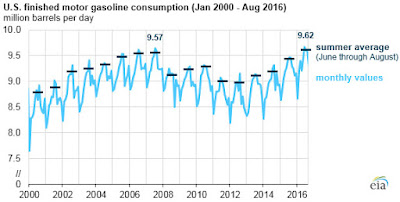 U.S. gasoline consumption during the summer period of June through August 2016 increased by 169,000 barrels per day, or 1.8 percent, as compared to the same period in 2015, the EIA said in its Today in Energy brief.

Vehicle miles traveled were also higher in summer 2016, growing by 9.3 billion miles per day from the summer of 2015, an increase of nearly 3.0 percent.