Viking River Cruises on Mar. 1 welcomed the latest additions to its fleet with the christening of six new Viking Longships during a waterfront celebration in Amsterdam.

The christenings of Viking Rolf, Viking Kadlin, Viking Alruna, Viking Egil, Viking Vilhjalm and Viking Tialfi mark another year of record expansion for Viking. The sextet of christenings comes just two years after the company set a second Guinness World Record for the most new ships launched in a single day and one month before Viking Ocean Cruises launches its second ship, Viking Sea. 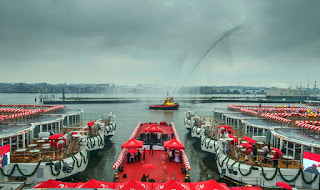 Of the six new Viking longships, four will be deployed on the cruise line’s most popular itineraries on the Rhine, Main and Danube Rivers; the remaining two will sail the Seine River on Viking’s Paris and the Heart of Normandy itinerary.

“River cruising remains one of the fastest-growing segments of travel, and we would not be the leading river cruise line without the help of travel agents,” Torstein Hagen, chairman of Viking Cruises, said in a statement.

Recognizing the contribution the travel trade has made to the growth of the river cruise industry, Viking honored six of its key partners by naming them as ceremonial godmothers for the six new ships.

The naming of ships by ceremonial godmothers is a naval tradition that dates back thousands of years.

Later this month, Viking will also debut a seventh new river ship for 2016, Viking Osfrid, which is inspired by the Longships design and specifically built for the Douro River, bringing the company’s total number of ships in Portugal to three.

Each Viking Longship accommodates 190 passengers in 95 staterooms including two Explorer Suites, seven two-room Veranda Suites with a full-size veranda in the living room and a French balcony in the bedroom; 39 Veranda Staterooms with full-size verandas; and 22 French Balcony Staterooms.

Staterooms include amenities including hotel-style beds, heated bathroom floors, mini fridge, and both U.S. and EU outlets. Longships also include sustainability features such as onboard solar panels and organic herb gardens. More information is available at www.vikingcruises.com.