The cost of air travel: Putting it in perspective

on March 07, 2016
A comment about the cost of air travel on the Facebook page of one of the world’s major airlines caught my attention and practically begged to be put into its proper perspective.

“Air travel has become very expensive,” the writer complained, then went on to say how airlines should give their customers better service instead of raising prices.

In fact, the cost of air travel over the short term as well as historically has actually come down.


Air travel is one of the most economical methods of travel on a cost-per-mile basis. For example, in its 2015 publication “Your Driving Costs,” AAA quantified the cost of operating an automobile ranging from a low of 38 cents per mile to a high of 93.3 cents per mile depending on the size of the vehicle and the length of the trip. Generally, the shorter the trip or the larger the vehicle, the higher the per-mile cost.

To an extent, that principle applies to air travel as well, but the per-mile costs for air travel are far lower than traveling by car.

For purposes of illustration, I priced five non-stop round-trips on four different airlines. For consistency, the outbound legs were all on Saturday, Mar. 19 and the return legs a week later. Finally, I selected the lowest prices available on those dates regardless of the time of day the flights departed.

The longest sample flight was from Seattle-Tacoma International Airport (SEA) to Dubai International Airport (DXB) on U.A.E.-based carrier Emirates. The lowest cost ticket on that route for the dates selected was $1,550. The route, according to AirMilesCalculator.com, is 7,419 miles each way. Accordingly, that flight would cost an economy passenger 10.5 cents per mile ($1,550/14,838 miles).

Another international sample flight, SEA to Frankfurt, Germany (FRA), returned a somewhat higher figure. The sample flight on German carrier Lufthansa would cost $1,690 to travel the 5,099 miles each way, resulting in a per-mile figure of 16.6 cents.

A non-stop flight from SEA to New York’s John F. Kennedy International Airport (JFK) on American Airlines (NYSE:AAL) would cost $509 for the 4,836 mile round trip, or 10.5 cents per mile.

As with the cost of operating an automobile, shorter flights will cost more on a per-mile basis, in part because they do not benefit from the economies of scale. 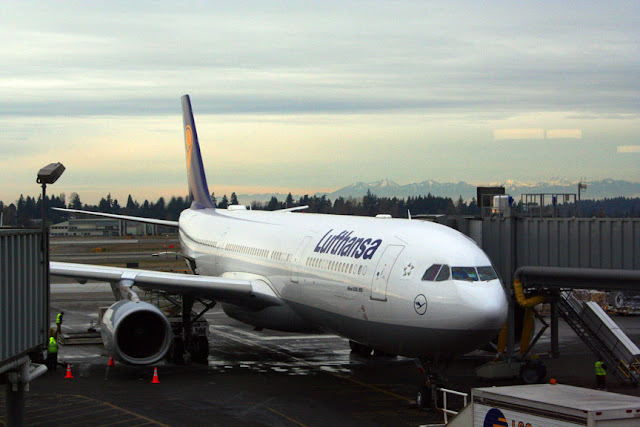 A non-stop flight from SEA to Los Angeles International Airport (LAX) on Seattle-based Alaska Airlines (NYSE:ALK) cost $268 for the 1,912 mile round trip, or 14 cents per mile.

Similarly, a non-stop from Phoenix Sky Harbor International Airport (PHX) to Chicago’s O’Hare International Airport (ORD) on American came in at $533, or 18.5 cents per mile for the 2,878 mile round-trip. I chose the PHX-ORD flight to illustrate another point: In terms of real dollars, the cost of air travel has dropped dramatically from what it was decades ago.

Growing up in Phoenix, we made periodic trips to Chicago to visit relatives. In the late ‘60s, under the authority of the defunct Civil Aeronautics Board (CAB), a round-trip ticket from PHX to ORD on American Airlines was $266.50, and that was in 1968 dollars.

According to the inflation calculator on DollarTimes.com, a $266.50 ticket in 1968 should cost $1,860 today. It doesn’t. Instead, that sample round-trip flight costs less than one-third of what it cost back in the day when measured in today’s dollars.

In the intermediate term, therefore, airfares are significantly lower than they once were. Even in the short term they are declining, not rising. According to the Bureau of Labor Statistics Consumer Price Index, airline fares for U.S. carriers fluctuated over the past two years but saw an overall decline of 3.0 percent in 2015 and 4.7 percent in 2014.

Further, the cost of airfare compares very favorably to other methods of travel.

Traveling by rail from Seattle to New York City on Amtrak’s Coast Starlight could be done for as low as $796, or 16.5 cents a mile, but that is only for a seat, not a berth, and you will occupy that seat for nearly 21 hours.

Going by bus, the cost is lower but the time spent traveling is much greater. A round trip between Seattle and Los Angeles would cost $114, or six cents per mile, but the trip in each direction will require as long as 28 hours. That’s a lot of sitting and a lot of time spent, perhaps much of it without being productive, to save $154 over the cost of a plane ticket.


Finally, the writer commented that airlines should offer better service with the overarching point that better service would earn greater customer loyalty while raising prices would erode that loyalty.

Better service is certainly a concrete way to build customer loyalty. However, the comment in this case seemed especially incongruous because it was posted on the Facebook page of U.A.E.-based Emirates, which is consistently rated as one of the world’s top airlines for its service.

I don’t know how much better the writer hopes service will get.