U.K.-based SKYTRAX has renewed the 5-Star ratings for 2016 for all seven airlines that earned the coveted award for their service in 2015 according to a news release issued by one of the seven, Japan's All Nippon Airways (ANA). ANA has held the 5-Star rating four the fourth consecutive years. 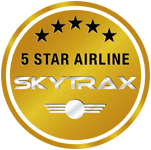 The six other airlines that held the coveted rating in 2015 passed SKYTRAX’s “renewal audit” and have also been reconfirmed as 5-Star carriers for 2016. Those airlines are Asiana Airlines, Cathay Pacific, Garuda Indonesia, Hainan Airlines, Qatar Airways, and Singapore Airlines.

In addition to retaining the honor of being the world's best airlines, the small group remained exclusive, with no other airlines earning five stars.

According to SKYTRAX, the rating is an indication of an airline’s overall service, not just the in-flight experience.

“A great product is not by itself the key to a 5-Star Airline rating, and Skytrax Star Rating also places great emphasis on the quality of front-line service an airline provides,” U.K.-based SKYTRAX explained on its website. “A 5-Star Airline rating recognises airlines whose front-line staff (across airport and onboard experience) deliver a true and consistent 5-Star standard of service delivery.”

SKYTRAX said the airlines retained their rating for the quality of its onboard product and service and for the standards they provide at their home-base airports.

For its part, ANA credits "[A] number of new initiatives to improve its services" that were introduced during the past year as part of the reason for its continued high ratings.

ANA's airline's history dates to December 1952 when the Japan Helicopter & Aeroplane Transports Co., Ltd. was established with the goal of restoring regular air transportation services that were disrupted by World War II. ANA's current active fleet consists exclusively of Boeing (NYSE:BA) aircraft including 767s, 777s and 787 Dreamliners, which the airline was the first to fly commercially.

Officials at fellow award recipient Hainan Airlines, which has held the 5-Star rating for five consecutive years, credit the honor to the carrier's culture of continuous improvement.

"We have recently partnered with globally recognized hotel chefs to design our international menus have expanded our popular complimentary business class limousine service to all our US and Canadian gateways and key cities in China," the airline's Joel Chusid told TheTravelPro in an email. "We recently launched new service at Manchester, England and will soon add Tel Aviv and Calgary to our expanding network."

Hainan Airlines was founded in 1993 and has grown to be China’s largest independent airline, with a fleet of over 130 aircraft, including wide body Airbus A330 and Boeing 787 Dreamliner jetliners.

Cathay Pacific Airways is a Hong Kong-based airline offering scheduled passenger and cargo services to nearly 200 destinations in Asia, North America, Australia, Europe and Africa. It operates a fleet of more than 140 wide-body aircraft including Boeing 747s and 777s, as well as Airbus A330s, A340s and A350s.

Garuda Indonesia was founded in 1947 and commenced service in 1949. It is the flag carrier of Indonesia. Named after the holy bird Garuda of Hinduism, the airline is headquartered at Soekarno–Hatta International Airport (CGK) near Jakarta. Its website currently displays a picture of flight attendants holding the SKYTRAX 5-Star awards from 2015 and 2016.

Garuda Indonesia's fleet is in the process of bring "standardized," according to the carrier's website. The airline will operate Boeing 737 NextGen and Bombardier CRJ1000NextGen for short-haul and regional routes, Airbus A330s for medium-haul routes, Boeing 777-300ERs for long-haul routes, and Airbus A320-200 for Citilink.

Qatar Airways, which commenced operations in 1994, is the state-owned flag carrier of Qatar with Hamad International Airport (HMD) in Doha its home base. Its passenger fleet consists of Airbus A319s, 320s, 321s, 330s, 340s and six A380 super-jumbo jets as well as Boeing 777s and 787 Dreamliners.