on February 01, 2016
Seattle-based Alaska Airlines recently revealed what it is calling the most substantial updates to its brand in a quarter century.

The two biggest changes to Alaska’s (NYSE:ALK) visual identity are a new design of its name, or “wordmark” as it is called in the advertising trade, and an update of the iconic Eskimo that has appeared on the tails of its planes since the early 1970s. 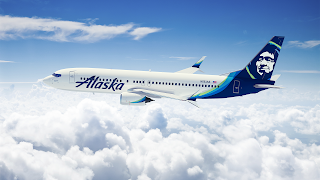 “Our values are staying the same, but it’s time for our brand to show up bigger,” Sangita Woerner, Alaska’s VP of marketing, said in a statement announcing the changes. “As we continue to grow, we are updating the outward expression of our brand so it shows up bolder wherever we fly.”

The updated wordmark introduces cleaner lines and italics but is still very similar to previous versions, retaining “[S]ome equity from the wordmark that Alaska’s customers have come to know,” the airline’s statement said.

Updating the Eskimo was a bit trickier.

The icon on the tail has become so recognized – and indeed, beloved – that rumors in the late 1980s of a new logo inspired a “Don’t Touch the Eskimo,” resolution in the state of Alaska. With an updated image as the goal, members of the airline’s marketing team traveled to the state of Alaska to interview native artists with the overarching objective modernizing the Eskimo while paying respect to all that he represents to the company and its people.

“I see that logo and that image as being extremely important as an ambassador for the indigenous people of Alaska,” Perry Eaton, an Alutiiq artist consulted for the project, said, calling the image “a touchstone.”

The refined image includes smoothed and simplified features and an expanded ruff to include pops of color, which customers will also see in airports, on board flights and online.

Other changes that will be made throughout the remainder of 2016 will include new signage at the airports the airline serves, a new airplane paint job or “livery”, a refreshed website and mobile app.

In addition to the visual changes, the carrier has made a number of cabin enhancements in the past year including free entertainment and premium just-released Hollywood movies, signature onboard entrees designed by Seattle celebrity chef Tom Douglas and power in seatbacks throughout the aircraft.