And the winners are …


FlightStats has released its 2015 On-Time Performance Service Awards detailing which airlines worldwide had the best – and the worst – on-time performance records last year.

Inaugurated with the 2009 report, The FlightStats On-time Performance Service (OPS) Awards “[R]ecognize airlines and airports around the world that deliver the highest percentage of flights to their arrival gates within 15 minutes of the scheduled arrival time,” according to the company’s website. 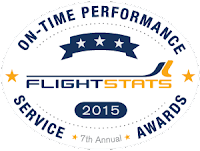 The seventh annual report is based on details compiled by the Portland, Oregon-based company and shows that, overall, foreign carriers have better on-time records than North America’s major airlines. The report also shows that the airlines with the worst on-time records are in the Middle East and Africa region, though not all airlines in that region performed poorly.

The airline with the best record overall was Spain’s Iberia Express, with 93.5 percent of its flights arriving within the 15-minute on-time window. Next was airBaltic, with a 91.75 percent on-time record, followed by Latin America’s Copa Airlines at 91.02 percent. The two airlines that rounded out the top five were also the two best-performing major international airlines: Japan’s JAL had 89.44 percent of its flights arriving on time, followed by Iberia at 88.97 percent.

American Airlines (NYSE:AAL) was the second-highest ranked of the three major U.S. carriers but sixth overall on the list of major North American carriers, at 78.98 percent on-time performance. It was followed by Air Canada at 78.8 percent, United Airlines (NYSE:UAL) at 78.14 percent, American Airlines’ merger partner U.S. Airways at 77.77 percent and jetBlue (NASDAQ:JBLU) at 77.55 percent.

Qatar Airways had the best record of major airlines in the Middle East and Africa, with 85.93 percent of its flights arriving on time. Saudi Arabian Airlines was second in the region with 78.78 percent on-time performance followed by Emirate at 76.01 percent, Kenya Airways at 74.11 percent and Egyptair at 71.43 percent.

Had Qatar been included in the Major International Airlines category, it would have ranked eighth behind Brazil’s TAM Airlines, which had 85.98 percent on-time performance. However, a spokesperson for FlightStats told TheTravelPro that an airline must have at least 1,000 flights in three regions of the world to be considered a "major international airline." While Qatar is a significant player in the airline industry, its flights do not meet that criteria.

Three of the 53 airlines rated had on-time performance below 70 percent and all three were in the Middle East and Africa region. They were flyDubai at 66.4 percent, Turkish Airlines at 66.29 percent and Pegasus Airlines at 62.66 percent.

FlightStats also showed that the airline alliance oneworld had the best cumulative on-time performance at 80.97 percent followed by Star Alliance at 77.83 percent and the SkyTeam Alliance at 75.08 percent.