on October 19, 2015
Japan’s All Nippon Airways (ANA) has announced the schedule for increased non-stop flights between Tokyo’s Haneda Airport (HND) and Shanghai, China.

The additional flights, which will be added in two phases, are the result of an agreement reached between the governments of Japan and China in May. The first additional round-trip flight will begin operating on Oct. 25 with an additional round-trip to begin in February 2016, subject to approval by the relevant authorities, the carrier said in a statement announcing the new flight schedules. 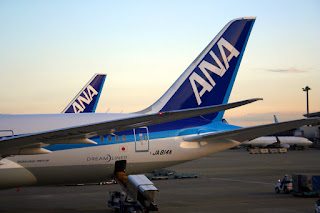 ANA currently operates one round-trip flight per day from HND to Shanghai’s Hongqiao International Airport (SHA). Those flights leave HND at 10:05 a.m. and arrive at SHA at 12:15 p.m. Return flights leave SHA at 1:40 p.m., arriving at HND at 5:25 p.m. Passengers on those flights ride a Boeing (NYSE:BA) 777-200 aircraft.

With the introduction of the winter timetable later this month, ANA will add a second daily round trip between HND and Shanghai. Those flights will depart HND at 6:30 p.m., arriving at Shanghai’s Pudong International Airport (PVG) at 9:10 p.m. Return flights, which begin Oct. 26, will depart PVG at 8:20 a.m. and arrive at HND at 12:05 p.m. The new flights will employ a Boeing 767-300 aircraft.

ANA will introduce a third daily round-trip flight beginning Feb. 1, prior to the Chinese New Year. Those flights will depart HND at 10 p.m. and arrive at PVG at 12:35 a.m. Return flights, which will commence Feb. 2, will depart PVG at 1:45 a.m. and arrive at HND at 5:25 a.m. The new flights will be operated using a Boeing 777-200 aircraft with 70 Business Class seats and 153 economy seats, the airline said.

The new timetable was set to give passengers additional options when scheduling their travel. Additional flights will allow passengers visiting from China to remain in Japan longer and will make it more convenient to travel from Japan’s various regions to China when using HND to transfer from ANA’s network of domestic flights onto international flights, the carrier said.

Including flights from Narita Airport (NRT), the addition of the flights from HND brings the total number of round-trip flights operated by ANA between Tokyo and Shanghai to six daily flights, the largest number of flights between the two cities operated by a Japanese airline, the airline added.

Contemporaneously with the addition of the new flights, the airline will reduce the frequency of flights on the route between NRT and Chengdu Shuangliu International Airport (CTU) in the province of Sichuan to four round-trips per week.