Montréal: 'Beyond the Bagel' food tour

Montréal’s heritage includes a wide range of contributions brought to the area by Jewish people, primarily from Eastern Europe, who came to the city seeking asylum from war, conflicts and persecution. Visiting the areas many still call home can provide visitors to the city valuable insight into the people themselves, as well as to the food they brought to the New World.

Like most immigrants to Canada and the U.S., the Jews who came to Montréal gravitated to areas already occupied by fellow Jews. As a result, communities grew. Today, Hasidic Jews live alongside other Orthodox, Conservative and Reform Jews as well as members of the non-Jewish community in the areas known as Mile End, The Plateau and Centre Ville.


To document the Jewish community’s heritage, the Museum of Jewish Montréal was founded in 2010 and offers a number of tours to introduce visitors to various aspects of the area. Walking tours focus on those who founded synagogues, hospitals and cultural organizations; Rabbis, writers and radicals; and life working in the area’s garment industry. Being foodies, by wife and I chose a food tour called Beyond the Bagel.

Our guide Kat Romanow is a community manager at the museum who earned her Master’s degree at the city’s Concordia University. She also operates her own tour called “The Wandering Chew.” She met us a short distance from our first stop, Boulangerie Cheskie (pronounced, “Heshkie,” with a silent “C”), a “heimishe”or homestyle bakery near Avenue Bernard and Av du Parc. There, we sampled pastries including rugelach, cheese crowns and a layered pastry they call Russian babka, though it is actually kokosh, a pastry of Hungarian origin.

Despite the tour’s name “Beyond the Bagel,” those familiar foodstuffs would play a prominent role in the tour, as they have in the past and still do today in the diets of many in Montréal.

There are two bagel shops that have an intertwined history in Montréal, and each has a dedicated following. St-Viateur Bagel - founded by Isador Shlafman, Hyman Seligman and Jacob Drabbin - was the first bagel shop at which we would stop and sample our first Montréal bagel.

Montréal bagels are made with a yeast dough and malt; boiled in water; topped with sesame seeds, poppy seeds or other toppings; then baked at 450-500 degrees. Their center holes are larger than New York bagels, the bagels overall are smaller, slightly sweeter and decidedly more dense. Kat recommended either sesame seed or poppy seed toppings because they are the most popular and are therefore most likely the freshest on offer.


St-Viateur, located on Rue Saint Viateur between Av du Parc and Rue Jeanne-Mance, competes with Fairmount Bagel just a few blocks away on Avenue Fairmount between Rue Saint-Urbain and Rue Clark. Technically, Fairmount is the original. It was opened in 1919 by Shlafman, et. al., at the St-Viateur location. The proprietors later moved the shop to the slightly larger space on Avenue Fairmount.

Today, both sell fresh bagels 24 hours a day. While we sampled bagels from both and agreed that our preference was for the Fairmount bagel, it is a matter of personal preference and, for many Montréalers, a matter of loyalty. Other businesses, including our hotel and other establishments we visited, post signs declaring which shop’s bagels they “proudly serve.”

Pacing ourselves and resisting the urge to finish every last bite, we moved on to Wilensky’s Light Lunch, a little shop famous for its “special” -- beef bologna, beef salami and mustard placed on a roll, then into in a sandwich press. Wilensky’s, which has been around since 1932, offers hot dogs, chopped egg sandwiches, cheese sandwiches and makes its own syrups for the sodas they mix to order.


Another stop along Boulevard St-Laurent, the street that divides the city’s east and west sides, was Boulangerie Hof Kelsten. Located near Avenue du Mont-Royal, it is the newest Jewish bakery in the area and part of what is being called the “New Jewish Food movement,” Hof Kelsten is purportedly the only place in town to buy a bialy, which is like a bagel with a large center area that is filled with grilled onions and spices. They also make rye breads, rugelach and Danish pastries.

A couple of blocks down Av du Mont-Royal is a long-standing deli and popular breakfast spot, Beautys Luncheonette. Founded by Hymie Sckolnick and his wife Frieda, it is now run by the couple’s children. Frieda developed the Beautys special, which is a bagel from St-Viateur Bagel with cream cheese, smoked salmon, tomato and onion. Beautys is also famous for its mish-mash omelet.

The tour draws to a close near Moishes Steak House, a historic Jewish steakhouse at the same location in The Plateau since 1938, and concludes with a nosh of a Montréal smoked meat sandwich from Schwartz’s Deli a few doors farther along St-Laurent. 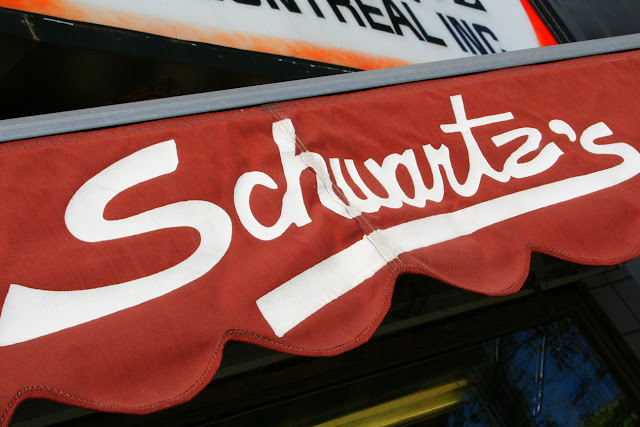 Montréal smoked meat consists of beef brisket that is cured for 10 to 12 days, then smoked for six to nine hours, followed by steaming for three hours to reintroduce some of the moisture lost during the smoking process. The result is meat that is extremely tender and flavorful.

At Schwartz’s, they proclaim that the entire process is done by hand in the old school manner. From the curing to the smoking and steaming, and finally the slicing, they proudly say the meat never goes near a machine.

Schawartz’s was founded in 1928 by Reuben Schwartz, a Jewish immigrant from Romania, and has been a fixture in the area ever since. A bit of an uproar centering on the deli surfaced in 2012 when Celine Dion, her manager-husband and a group of investors bought Schwartz’s, much to the consternation of the locals who feared the group would “create substandard clones of the one-of-a-kind restaurant,” as an article in Canada’s National Post put it.


To date, that has not happened. The only change Dion’s group has made is the addition of a storefront that is strictly for take-out orders. That facility adjoins the sit-down portion of the deli.

Our tour also included stops at the sites of several noteworthy contributors to the Jewish food scene that have since shuttered their windows and shut their doors. They include the site of Mrs. Whyte’s pickle factory, begun out of her home kitchen in 1932; Horn’s Cafeteria where members of Montréal’s literary community would meet prior to World War I; the Bucharest Restaurant where Romanian Jews first introduced their tradition of grilled meats; Warshaw’s Supermarket as well as Steinberg Grocery, both of which are now out of business but which both played important roles in the lives of area residents.

An interesting and worthwhile tour for anyone with an interest in the history of the area’s Jewish community, in food, or just history in general. Just bring comfy shoes and an appetite.