on August 05, 2015
Dallas/Ft. Worth-headquartered American Airlines and Seattle-headquartered Alaska Airlines have expanded an agreement that will give Alaska Mileage Plan members the ability to earn and redeem miles on nearly 3,000 more flights currently operated by American’s merger partner US Airways.

The move, which is part of American’s ongoing merger process, was characterized as an opportunity to strengthen a long-standing relationship.

“Our relationship with Alaska goes back more than 15 years and we continue to look for ways to work together to enhance the benefits for our customers,” Andrew Nocella, American’s chief marketing officer, said.

The relationship between Alaska and American has included frequent flier reciprocity for several years, giving members of each airline’s frequent flier program the ability to earn and redeem miles for each other’s flights. That reciprocity was expanded in 2011 to include reciprocal elite benefits on each airline. 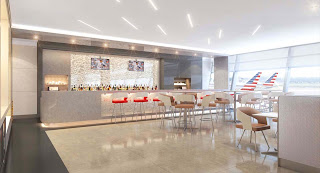 For its part, American Airlines has kicked off the largest Admirals Club lounge makeover in its history. An example of the club redesign is shown in the artist’s rendering above.

The announcement of the opportunity to “earn and burn” miles on the legacy US Airways flights comes just two weeks after Alaska announced the addition of Hainan Airlines to its portfolio of Mileage Plan partners. That alliance gives Mileage Plan members the ability to earn miles across the China-based carrier’s 90-city global network. The addition of the two airlines brings to 13 the number of global airlines with which Alaska has partnerships.