on July 20, 2015
Spirit Airlines, the carrier notorious for its bare-bones approach to ticket pricing, has gone on the offensive and is encouraging passengers of other airlines to ask for a refund of amounts they were allegedly overcharged for "bundled" services they didn't use.

Spirit (NASDAQ:SAVE), which charges for everything from carry-ons to seat assignments to checking in with an agent, launched a website called The Unbundlers on which two fictitious lawyers encourage people who feel “swindled by the major airlines” to ask for their money back. 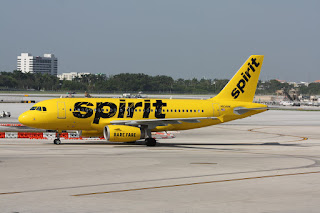 "For decades, the major airlines have been playing a psychological trick on their passengers,” the airline’s news release said. “They charge people very high airfares, and then tell them they are giving away different items and services for ‘free’.”

Really? Maybe decades ago, but so much not today. In fact, as reported on TheTravelPro, a recent study showed that airlines earned more than $38 billion in 2014 from the sale of so-called “ancillary" services. The leader among U.S. airlines? Spirit, which derived a whopping 39 percent of its total revenue from the sale of ancillary services.

Interestingly, Spirit notes that its airfares are, “on average nearly 40% less” than other carriers, according to U.S. Department of Transportation statistics. It looks to me like it has found a way to get pretty much all of that 40 percent back into its corporate coffers through its nickel and dime approach to charging its passengers. But I digress.

The website which encourages passengers to “Tweet [their] claim” against other carriers, includes a calculator that asks for the airline most recently flown and then will “calculate” how much a passenger may have been overcharged for various services they didn’t use.

For example, clicking on Southwest (NYSE:LUV), then clicking on the “checked bag” button on the calculator returns a figure of $60. Because Southwest does not charge for the first two checked bags, Spirit is implying that every passenger pays $60 so some passengers can check bags without being charged.

Spirit's calculator also returns $70 for carry-ons, which I believe is unsupportable by any measure other than the rapacious fees Spirit itself charges for carry-ons.

While airlines pay for baggage handlers who load and unload checked bags, we passengers schlep our own carry-ons. Aside from the modest amount of additional fuel required because of the additional weight, airlines don't incur any meaningful expenses because of passengers' carry-on luggage. The fact Spirit charges from $26 to $100 for any carry-on larger than the one small item allowed does not mean that other carriers' ticket prices are inflated by $70 because they don't charge us separately for our carry-ons.

Further, Spirit puts reclining seats, Wi-Fi and in-flight magazines into the category of things that people pay for but don’t use.

The exorbitant fees passengers pay for these services? $1.51 for reclining seats, $1.40 for Wi-Fi and $0.24 for in-flight magazines. With regard to Wi-Fi,  because no domestic airline offers Wi-Fi service for free I conclude Spirit means every passenger pays $1.40 to have Wi-Fi available, whether they use it or not.

Spirit also commissioned a survey to find out what over 2,000 air travelers use and don't use and presented those findings in the light most favorable to its dubious case. For example, the survey found that 25 percent of air travelers do not bring a carry-on. That means 75 percent -- or one out of four -- do. It also found that 60 percent still read the in-flight magazine, 80 percent took advantage of the offered snacks, 79 percent took advantage of the beverage service and 59 percent checked in with an agent instead of using a kiosk.

Finally, Spirit’s news release said, “A quick Twitter search using #Unbundlers shows that hundreds, if not thousands, of people are upset with airlines [sic] unsavory bundling schemes.” I believe thousands, if not millions, of air travelers are sick and tired of being nickel and dimed. I am certainly among them.

Addendum: Following publication of this post, a spokesperson for Spirit told TheTravelPro that the airline's average passenger pays $54 in charges for the ancillary services they choose, which results in an all-in ticket price well below that of the competition. The spokesperson also said that their passengers have expressed a willingness to "put up with a little less leg room" and forgo other amenities in exchange for the savings, which is a decision each of us make when choosing which airlines to fly.