on July 27, 2015
A new law designed to modernize France’s economy, speed up growth and deregulate many industries is expected to open up more ground transportation options between smaller hubs, resulting in more options for tourists visiting France.

The new legislation, called the Macron Law, is expected to take effect Aug. 1 and, according to at least one industry insider, is expected to result in the opening up of long distance coach operations across the country.

“With the passing of the Macron Law we will see rapid growth in new coach operators throughout the country,” Naren Shaam, CEO and founder of the Berlin-based travel search website GoEuro.com said in a statement provided to TheTravelPro. “Two years ago Germany went through a similar process and the industry has seen between 50 and 80 new operators come into the market, connecting small towns and villages to local and international hubs. We expect similar numbers in France.”

Hailed by Shaam as making the country more “business friendly,” GoEuro.com estimates that the French travel industry will enjoy 5,000,000 coach passengers within the next year, resulting in an extra 22,000 jobs created.

“Deregulation of the coaching industry will also benefit consumers as we expect to see a 10% to 70% drop in ticket prices over the next year as more operators come into the market,” Shaam predicted.

New coach routes in France will mean that travelers will no longer need to change trains in Paris or other large hubs. Direct coach routes to smaller hubs are expected to become available for distances over 100km. 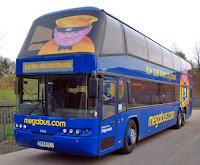 British companies such as National Express and Megabus are expected to expand their services into other areas of France outside of Paris. Other major international players include iDBus, Starshipper and FlexBus.

Some 3.4 million visitors arrive in France from the U.S. annually; 2.1 million of those people use the French rail service while in country. The Macron Law is expected to encourage an additional 600,000 Americans to use coach transportation services in the years to come, GoEuro.com estimates.