For the eighth consecutive year, airline revenue derived from the sale of so-called ancillary services continued to rise, leaping more than 21 percent to more than $38bn in 2014, according to a newly released report.

Conducted IdeaWorksCompany and sponsored by CarTrawler, researchers pored over financial filings made by 130 airlines worldwide, 63 of which disclosed qualifying revenue activity. Those airlines reported a total increase in ancillary revenue of $6.6bn, to $38.1bn in 2014 compared to $31.5bn in 2013.

“Ancillary revenue is an increasingly important indicator of commercial success, and a major contributor to the bottom line of airlines across the globe,” Michael Cunningham, CCO of CarTrawler, said in a statement accompanying survey results. “It is no longer just the preserve of low cost carriers – it is something from which all airlines are benefiting.” 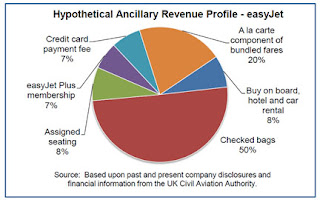 Ancillary revenue is revenue gained from retail activities, à la carte services including food and beverage and checked-bag fees, and the sale of frequent flier miles. The graphic at right shows a hypothetical example of how one carrier’s ancillary revenue is derived.

Delta Air Lines (NYSE:DAL) was third, deriving $3.21bn from ancillary revenue compared to $2.53bn last year. Air France/KLM was fourth with approximately $2.05bn, an increase from $1.71bn in 2013. Ireland-based low-cost carrier Ryanair rounded out the top five with $1.9bn, up from $1.69bn in the previous report.

Low-cost carriers had the highest ancillary revenue as a percentage of total revenue. Since 2011, the top slot has been held by U.S.-based Spirit Airlines, which is conspicuous among consumers and regulators for its aggressive pursuit of à la carte sales. The airline has a policy of “no waivers & favors” for enforcing its fee structure and intentionally seeks to “treat all customers the same,” according to the study. In 2014, Spirit derived nearly 39% of its total revenue from ancillary services.

Key findings of the study include:
CarTrawler and IdeaWorksCompany will release a 90-page compilation of results and overall rankings from the 63 disclosing airlines during September 2015.