The results of the sixth annual survey of which airlines are the best when it comes to using your frequent flier miles show value-oriented carriers continue to lead the pack, but also showed improvements among larger carriers.

According to the 2015 Switchfly Reward Seat Availability Survey released May 14, Southwest Airlines (NYSE:LUV) and airberlin tied for first place for their passengers' ability to book a "saver" seat using accrued frequent flier miles. Both airlines offered seats on 100% of their flights for the test period queried.


Airberlin, Southwest, and Virgin Australia have placed within the top six in every edition of the reward survey since the first such survey in 2010. But global network carriers Air Canada (and the Aeroplan coalition loyalty program), Lufthansa/SWISS/Austrian, and Singapore Airlines are now in the top five.

Three broad themes came into focus according to the 2015 survey. First, airlines overall are continuing to be more generous with reward seats, with the average for all airlines increasing to 74 percent compared to 66.1 percent in the first survey six years ago. Second, global network airlines are improving their rankings for long-haul reward seat availability. Third, within the U.S., the availability of close-in reward seats is improving, with United, Air Canada, Southwest, and American all showing significant improvements in offering more seats for departures within days or weeks of booking.

"The meaningful improvements we are seeing in 2015 are promising signs that the voice of the airline customer is stronger than ever," Daniel Farrar, Switchfly CEO, said of the survey results. "Consumers expect something of value from brands in return for their business and for their loyalty, and they want and expe ct offers that are relevant reflections of themselves."

The sixth annual survey, conducted in March by a company called IdeaWorks, is based on 7,640 booking queries made by the company at the websites of 25 frequent flier programs. Travel dates spanned June through October 2015, with top routes for each carrier checked to assess "saver style" reward seat availability. The company then recorded whether reward seats were available for both outbound and return travel on the dates specified.

The 25 carriers in the survey remained the same as in 2014 with one exception: Alitalia replaced US Airways because its frequent flier program was merged with American Airlines' (NASDAQ:AAL) AAdvantage Mileage program during March 2015.


The survey showed that value-based Southwest was the highest-ranked U.S. carrier with reward seats available on 100 percent of the flights queried. Non-U.S. airlines occupied the second, third, and fourth-place positions.

Seattle-based Alaska Airlines was the No. 3-ranked U.S. airline and in a three-way tie for No.7 overall with 80 percent seat availability. For Alaska, that represents a significant improvement from the 58.6 percent availability in 2014.

In the No. 4 slot among U.S. carriers, United Airlines (NYSE:UAL) continues to be the highest ranked among major U.S. airlines. At No. 8 overall in the 2015 survey, the airline has recaptured the ranking it had in 2013 but seat availability has not completely recovered. This year, United had saver seats through its MileagePlus program available on 75 percent of its flights, up from 71.4 percent in 2014 but still five percent lower than the 80 percent availability in 2013 and significantly lower than the 87.1 percent availability in 2012.

The overall No. 2-ranked airlines in 2015 is Virgin Australia. However, while retaining the No. 2 position it held in 2014, seat availability slipped 2.9 point to 96.4 percent.

The survey also looked at long-haul flight reward availability and found some very different results. One obvious difference is the absence of value-based carriers from the long-haul markets.

The following is a chart of the survey's key findings, provided by IdeaWorks. Click on the image to view the chart in full size. 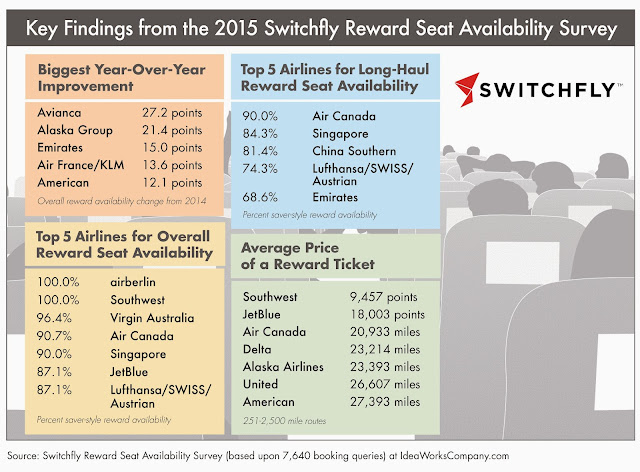