Alaska Airlines flight takes off with ramp agent in hold

According to a statement released by Seattle-based Alaska (NYSE:ALK), the pilot heard a banging from beneath the aircraft immediately after takeoff and declared an emergency for priority landing.

After landing, the agent, an employee of Menzies Aviation, emerged from the front cargo hold – which is pressurized and temperature controlled – and told authorities he had fallen asleep. The agent was transported to a local hospital as a precaution. He was later released and has passed a drug test, the airline reported. 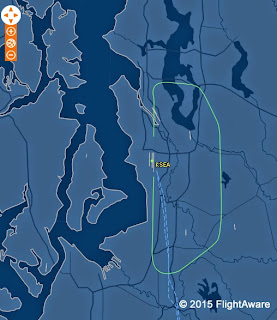 In a statement published Monday evening, the airline said the employee had started work at 5 a.m. and was scheduled to end his shift at 2:30 p.m. During a pre-departure huddle, the team lead noticed the employee was missing. The team lead called into the cargo hold for the employee and called and texted the employee’s cell phone, but did not receive an answer. His co-workers believed he had finished his shift and gone home.

The plane landed at SEA 23 minutes after pushing back from the gate at 2:39 p.m., according to FlightAware.com. In a statement on its blog, the airline said the Boeing 737-900 was actually in the air for 14 minutes.

As I interpret the graphic above based on my 3,500 hours at the controls of various aircraft and my knowledge of operations at SEA, the aircraft appears to have taken off in a northerly direction and turned east before reaching the Interstate 90 Bridge south of Seattle. The aircraft continued south for several minutes before turning west, then north near Federal Way, Washington for its return to SEA. When contacted by TheTravelPro, Alaska Airlines spokespersons could not confirm the route, saying they did not have that level of detail.