on February 04, 2015
Nah. A rumor made up of whole cloth. Pure speculation on my part. But considering the carrier’s aggressive growth in and courting of the Seattle market, nothing would surprise me.

The most recent example of that courtship is Atlanta-based Delta’s (NYSE:DAL) announcement that it is now serving coffee from Seattle-based Starbucks (NYSE:SBUX) “on board all of its flights around the world.” Not just those to and from the Pacific Northwest; everywhere Delta and its Delta Connection partners fly. That’s more than 5,000 flights per day.

“The move continues Delta's effort to partner with high-quality, like-minded brands in an effort to enhance the overall traveling experience for customers,” the airline said in announcing the move, which began in early February. 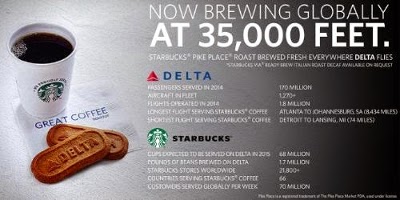 Delta has been aggressively expanding its presence in the Seattle market for the last several years. In 2013, the Seattle Seahawks and the Seattle Sounders FC chose Delta as the club’s “official airline” over hometown carrier Alaska Airlines (NYSE:ALK). That arrangement included the renaming the club level at CenturyLink Field the Delta Sky360 Club.

In 2014, when Delta launched nonstop service from Seattle-Tacoma International Airport (SEA) to Hong Kong (HKG), its vice-president for Seattle pronounced Seattle “Delta’s newest hub.” Read more here. At that time, airline officials also forecast that, by the summer of 2014, the carrier would be offering more international service from Seattle than all other carriers combined as part of the Seattle market's 86 peak-day departures to 26 destinations.

Finally, as residents of the area have observed, billboards touting Delta’s flights and service are almost ubiquitous throughout the Puget Sound region.

Delta has called Atlanta home since 1941 and, as far as anyone is saying, is not planning to move its headquarters to any of its 13 hub cities any time in the foreseeable future. But, as the aphorisms go, “Never say never,” and “Anything can happen.”