on July 07, 2014
A new report says increased tourism may be able to help reverse the decline of the reefs in the Caribbean, which have decreased significantly over the last half century. 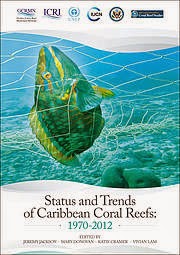 The 306-page report, Status and Trends of Caribbean Coral Reefs: 1970-2012, is the work of 90 experts over the course of three years. It says Caribbean corals have “declined by more than 50% since the 1970s” and says the decrease is “primarily due to the loss of grazers in the region,” including parrotfish and sea urchins. The full report is available for download here.

Regarding the loss of grazers, the study blames “An unidentified disease [that] led to a mass mortality of the sea urchin in 1983,” and adds that “[E]xtreme fishing throughout the 20th century has brought the parrotfish population to the brink of extinction in some regions.”

While the study concludes the reefs could be gone in 20 years, it also says, “[R]estoring parrotfish populations and improving other management strategies, such as protection from overfishing and excessive coastal pollution, could help the reefs recover.”

Tourism in general, which the report calls “the lifeblood of many Caribbean nations,” likely does play a part in the decline of the reefs; however, it is not the primary factor in the reefs’ decline. Neither can it single-handedly reverse the trend, but it can help.

“Positive impacts on reef health demonstrably have spill over effects on local economies, including the potential for alternative livelihoods to fishing, thanks to increased tourism revenues, replenishment of fish stocks and restoration of ecosystem services such as shoreline protection,” the authors wrote. In other words, tourism provides a way for locals to make their living other than fishing, which has lead to overfishing, which has lead to the decline in the reefs.

With regard to receding reefs, the Caribbean reefs are by no means unique. During a recent visit to Maui, locals told me that the reef in Molokini Crater, a popular snorkeling spot, has receded rather dramatically over the past couple of decades. There, however, the reef’s decline is widely acknowledged to be due primarily to tourist activity; specifically, snorkelers whose activity is detrimental to the fragile organisms.

There are ways humans can enjoy these natural wonders while also minimizing the negative effects of their presence. The following recommendations are from ResponsibleTravel.com, which specializes in responsible holidays and eco-tourism.

Choose a responsible tour operator. Ask questions about how they protect their local reefs and be sure their boat operators do not drop anchor into the reef.

If you snorkel or scuba dive near a reef, let the phrase "look, don't touch" be your guide. Don't touch reefs, keep your distance from marine life, and don't feed the fish because is can disrupt their natural behavior.

Finally, for obvious reasons, don't buy souvenirs made from coral or other threatened wildlife.

Reefs in many areas of the world are in decline. By our behavior when traveling, we can either hasten that decline, help slow it, or perhaps help reverse it.  Act responsibly, choose vendors who do so as well, then have a good time.