Cathay Pacific named Airline of the Year in SKYTRAX awards

on July 15, 2014
Cathay Pacific Airways was named Airline of the Year in the 2014 World Airline Awards announced at the Farnborough Air Show outside London on July 15.

SKYTRAX’s World Airline Awards are based on the world’s largest annual airline passenger satisfaction survey. Operated online between August 2013 and May 2014, nearly 19 million customer surveys were completed across a range of survey topics, resulting in the awards for Airline of the Year and a variety of category awards.

More than 105 different nationalities participated in the customer satisfaction survey, which covered over 245 airlines, from largest international airlines to smaller domestic carriers. Survey responses are screened to identify and monitor ISP / user information and delete duplicate or multiple entries, according to the World Airline Awards website.

Historically dominated by non-U.S. carriers, the 2014 World Airline Awards were no exception, even when the awards were broken down by region, though two American airlines were named among the world’s top regional airlines. 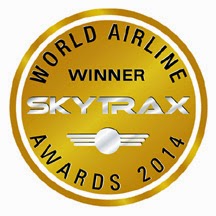