Passengers who choose to purchase the service will be able to use their own devices, including Smartphones or tablets, to surf the Web, access e-mail and update social networks including Facebook and Twitter and more. 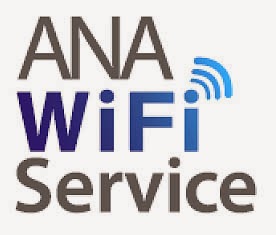 There are a couple of interesting aspects to ANA’s new offering. Unlike many in-flight plans, including GoGo and United Wi-Fi, ANA’s plan will charge by the amount of data transmitted. ANA will offer three plans that allow 5 MB, 10 MB or 20 MB of data at a cost of US$6 per 5 MB.

In-flight WiFi service was introduced in response to customer requests for on-board Internet access, as more people are becoming accustomed to using Smartphone and tablet technology while traveling.

The service is being provided in all classes of selected international flights served by Boeing 777-300ER and Boeing 767-300ER aircraft. Wi-Fi access is provided in partnership with JSAT Mobile Communications, which supports the “Internet OnAir” Wi-Fi service in Japan.

ANA’s news release on the topic said the service is suitable for Smartphones and tablets but was not recommended for PCs. However, ANA spokesperson Nao Gunji explained that the airline is concerned that PCs users’ bandwidth could be taken up by streaming content.

“PC is not recommended since you tend to receive flash contents (such as video ads)when you are browsing on PC,” Gunji said. “Since you will be paying by [the amount of] data, we don’t want you to waste your paid data by unwanted video contents.”

The service will definitely work with PCs, she added.