on December 17, 2013
If you travel internationally, even if that is just between Canada, the U.S., and Mexico, you’ll likely be exchanging currencies at some time. How to do it most economically?

The long-standing advice still holds: the best exchange rates are obtained at banks. Accordingly, many experienced travelers wait until they’ve arrived at their destination, then withdraw cash from a local ATM. That is precisely what I did during my recent trip to Germany: I looked for an ATM operated by a bank as opposed to a Bureau du Change or exchange service, then withdrew €300. 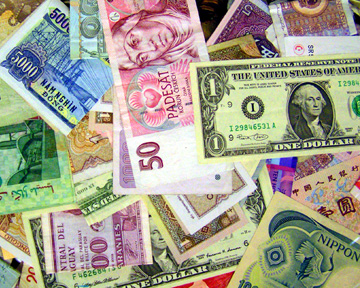 For my withdrawal, from an ATM operated by Deutsche Bank, I was charged a rate of $1.3745 plus a three percent foreign exchange fee.

Returning home with a foreign currency provides similar options. Arguably, the most convenient thing for many travelers is to change their currency at an airport kiosk or Bureau du Change. The most economical thing, however, is to wait until you get home and can take it to your bank.

Before leaving Germany, I checked the rates at foreign exchange kiosks at Frankfurt International Airport (FRA) and SeaTac International (SEA), and at my bank. What I found confirmed the best rates are likely at banks.

Two kiosks at FRA were offering to buy Euros at US$1.22, while the kiosk at SeaTac offered to pay US$1.185 to travelers who sold a quantity of €500. Often, though not always, larger transactions get a more favorable rate.

My last stop was my bank, which paid me US$1.295 per Euro; clearly the best rate I'd seen thus far.

Last March, when when we returned to our home in Seattle from a trip north of the border, we had CAN$100 in our pocket. While we would usually just tuck it away for our next trip to Canadar, I decided to exchange it so I’d have some cash for a business trip. In that case, my bank got me a net exchange rate of US$0.9125 cents per Canadian dollar. At SeaTac airport, the Travelex foreign exchange kiosk was offering a net exchange rate of US$0.6372 cents per dollar. My side trip to the bank saved me almost $30.

Of course, banks also make a profit by exchanging foreign currency. Even if they don't levy a service charge, they make money through the difference between the higher price at which they sell the currency and the lower price at which they buy it. Accordingly, it's a good idea to keep the amount of foreign currency you exchange to a minimum to minimize the expense of exchanging it.