Geeking out over the 787 Dreamliner

on September 19, 2012
The first Boeing 787 Dreamliner was delivered one week short of a year ago, on Sept. 26, 2011, to Japan’s All Nippon Airways (ANA). One month later, on Oct. 26, the pioneering aircraft made its first passenger flight, from Tokyo’s Narita airport (NRT) to Hong Kong (HKG).


In addition to being a frequent traveler I’m also a 3,500-hour pilot, so I have a very keen interest in this revolutionary airplane. 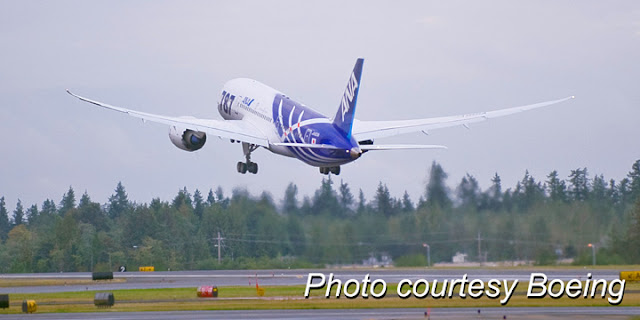 Much has been written about this jet since the program launched in April 2004, thanks to a record order from ANA. Writers have waxed rhapsodic about the innovations the plane would employ, and how riding in it would be a new type of passenger experience.
If you’ve followed the development of this aircraft, you likely know some of the high-level facts. If not, allow me to bring you up to speed.

Probably the biggest, and most pivotal, innovation in the Dreamliner is the use of carbon fiber composite material rather than aluminum. The composite makes up 50 percent of the primary structure including the fuselage and wings, thus making it stronger and lighter than comparable mid-sized commercial jets. Recently, one of Boeing’s salespeople gave me a promotional 787 pen with its pocket clip made of that very same carbon fiber material (pictured below right).
The strength of the carbon fiber makes several additional features possible. 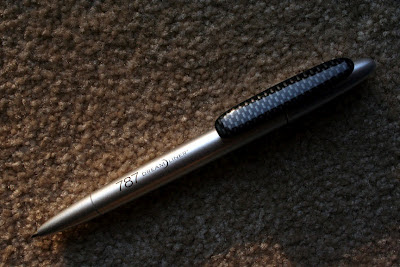 Studies showed that reducing the cabin altitude to 6,000 feet dramatically reduced the level of fatigue passengers experienced. Interestingly, lowering the altitude further provided almost no additional benefit, according to Boeing.

Because of its added strength, the fuselage can also accommodate larger windows. Although passengers have clearly preferred larger windows for some time, they caused engineering challenges. The loads the airplane structure must carry are more easily handled when a fuselage has fewer, or smaller, cutouts for doors and windows. With its stronger fuselage, the 787 can manage the loads despite the larger cutouts.

The aircraft’s comparatively lighter weight and use of engines that are among the most powerful manufactured today allow the Dreamliner to achieve Mach 0.85 (85 percent of the speed of sound), the same top speed as the 777. Most other commercial jetliners top out at Mach 0.8. Despite that, the engines are fuel-efficient, and the plane uses 20 percent less fuel than any other airplane of its size, according to Boeing data.

The speed of sound, by the way, varies depending almost entirely on the temperature of the air. The colder the air, the denser it is and the slower sound travels. To determine the speed of sound in knots, obtain the absolute temperature in degrees Kelvin (Celsius + 273°), obtain the square root of that number, then multiply by 38.94. To obtain miles per hour, multiply by 45. But I digress.

I said I was geeking out; I will not apologize.

The Dreamliner’s interior is reportedly quieter than more conventional aircraft; the air is cleaner and humidified; and the cabin is pressurized to a lower altitude, all of which reduce fatigue. The aircraft uses LEDs and mood lighting in the cabin and, as if to add icing to the cake, its windows are 30% larger and provide passengers with a better view than any other commercial aircraft.

Its wingspan of 197 feet is just slightly smaller than the 199 feet, 11 inch wingspan of the 777, a wide body that can carry over 300 passengers in a three-class configuration. The Dreamliner can carry between 210 and 250 passengers.

But, just as the map is not the territory, words do not an aircraft make, nor can they adequately describe the experience of riding in one, as even one of Boeing’s PR people acknowledged.

“There are no words we could put on paper to explain how special the airplane is,” Lori Gunter wrote TheTravelPro in an e-mail. In fact, she said, passengers have found that “[T]he new high level of comfort and convenience becomes the new norm about 20 minutes into the flight and it’s not until they fly on another airplane following their 787 flight that they realize how important all the new features are.”

Since the first delivery about a year ago, 20 more Dreamliners have been delivered, including another dozen to ANA and five to Japan Airlines. However, only a few of that already-small number are carrying passengers to and from the United States.

Japan Airlines put its first Dreamliner on its new Tokyo-Boston route on April 22.  ANA will introduce the Dreamliner on its Seattle-Tokyo (SEA-NRT) route on Oct. 1, and will operate the 787 on the San Jose, Calif.-Tokyo (SJC-NRT) non-stop route that kicks off Jan. 11, 2013.
The other 787s are operating in the eastern hemisphere.
ANA’s other 787s currently operate out of Haneda airport (HND) and fly to Okayama; Hiroshima; Beijing, China; and Frankfurt, Germany. HND, located 14 kilometers (8.7 miles) south of Tokyo, handles almost all domestic flights to and from Tokyo, while NRT handles the majority of international flights.
Ethiopian Air is using its sole 787 on the route between Addis Ababa and Tel Aviv, Israel, while Air India is using its just-delivered Dreamliner for domestic service.
For all these reasons, plus (honestly) getting to do something before a whole lot of other people, it was with great pleasure that I accepted an offer to be part of ANA’s media tour to introduce the Dreamliner to passengers traveling between Seattle and Tokyo. The tour – and my reports, however inadequate my words and photos may prove to be – will take place next month.