on August 20, 2012
A recent column, "The best - and worst - places to go in Europe" by travel writer Rick Steves ended with a sage bit of advice: "Don't let any travel writer limit your freedom to find your own ultimates." That quote reminded me of a column I wrote about two years ago comparing social networking sites to your favorite travel reporter or blogger.

Depending on how you use them, either can be useful or useless.

That has been the case since newspapers had travel reporters (or restaurant or movie reviewers, for that matter). To use such a reporter's information well, you’d have to get to know whether your taste aligned with theirs. As a result, you’d either take their recommendations or steer clear.

Rick Steves is a great case in point. Rick, whom I met and interviewed when I was a reporter/talk show host at KING Radio in Seattle, is a great guy and a good writer, but his early point of view on how to travel was economically. That was the premise of his "Europe Through the Back Door" approach.

That's not the way I want to travel.I’m not going to avoid a place because he thinks it’s too pricey, nor am I going to rent a van and hunt down campgrounds in Switzerland to save a few bucks. His style is not my style.

That said, he has some great tips (like where to buy tickets to museums and other attractions to either save money or avoid long lines), so even someone whose style differs from yours may have some valuable advice.

Whether your inclination is toward a travel blogger or reporter, or a site like TripAdvisor, you have to do your homework. 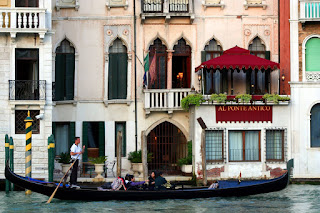 Consider this: when my wife and I visited Venice in 2009, we stayed at The Hotel Al Ponte Antico, the hotel rated Number One by TripAdvisor members. In my subsequent review, I agreed that there were a lot of things to recommend it but was also clear about it being a small, intimate hotel (only nine rooms) located right on the Grand Canal. That meant two things: it was not the place to go if you wanted a hotel where you’d be more or less anonymous, and that canal-side rooms might not be the quietest. All things considered, though, I gave it a rating of five out of five.

Some months later, another reviewer gave it a two out of five, complaining about the two things I’d mentioned in my review: size (resulting in a lack of anonymity) and proximity to the Grand Canal.

What does that mean? It probably means these people didn’t read into the reviews very far or they’d have seen what I (and others) had written. That’s part of being smart in your use of social media.

Next, look at the property’s own web site. For my recent trip to Amsterdam, I briefly considered staying at a hotel called the Black Tulip after reading several reviews in which T/A members described as funky and avante garde. However, when I went to the hotel’s web site, I learned the hotel catered to gay men with a bent for S&M. Perhaps in the interest of remaining “family-friendly,” TripAdvisor said nothing about that…

My recommendation is to find a blogger (or columnist or travel reporter) with whom you're in sync - whose point of view fits with yours - and make him or her your first stop. To me, that's the best thing short of a recommendation from a trusted friend. Then, use social media, but use it wisely, which takes a fair bit of work. Finally, check out the web sites of the places you plan to visit to see what they have to say about themselves.