on August 11, 2012
I’ve stayed at the Hilton in downtown Portland several times over the past couple of years. Because of my HiltonHHonors Diamond status, I’d always been upgraded to the Executive Tower and had never stayed in the main hotel until recently. The difference was dramatic. 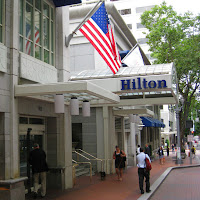 The Hilton Portland & Executive Tower consists of two different buildings managed as one hotel, with the same team members and managers responsible for both hotels.

As a loyal Hilton fan and, in the interest of full disclosure, a former Hilton team member, it gives me no pleasure to write this review. However, my pledge is to “call 'em as I see 'em.”

The Executive Tower, on the northeast corner of 6th and Taylor, is upscale and refined offering large, light, airy open spaces, and well-kept guest rooms. The Hilton Portland on the southwest corner is obviously an older building than its counterpart and currently showing its age.

The lobby, a guest’s first impression, is done in dark woods, obviously intended to contribute to a feeling of elegance and coziness. In some areas that works well, but this is Portland. Dark interiors can feel claustrophobic when sunlight is in short supply. Dark woods coupled with low ceilings also made the restaurant and bar, just off the lobby, seem cramped and less than inviting. 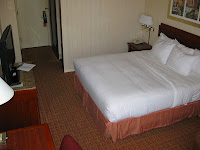 Even luxurious furnishings, however, would not make up for the lack of space. The living area of my guest room was smaller than any room in which I’d stayed at the Executive Tower, and the bathroom fixtures were such a tight fit that the toilet had to be set on an angle. It didn’t affect its functionality, but it made the whole room seem even smaller. 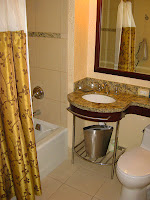 Because it’s Portland, air conditioners aren’t needed very often, but they were during my stay, and the one in my room was unusually loud, making it difficult to get a good night’s sleep.

The rooms do have the usual amenities: flat-screen TV (with some music channels designated), desk and workspace, wireless Internet access ($9.95 per day; complimentary if you’re a Gold or Diamond HiltonHHonors member), in-room safe, hair dryer, iron and ironing board, coffee maker, and Peter Allen Roth toiletries.

In the hospitality industry, service is key. Excellent service will often make up for less-than-ideal surroundings, at least in part, while poor service can taint one’s experience at even the best property.

Many of the staff members I encountered at the Hilton Portland failed to live up to the Hilton service standards. At almost every Hilton at which I've stayed, every team member smiles, makes eye contact, and greets their guests whenever their paths cross. Many times, though not always, staff members at the Hilton Portland passed their guests in the hall or joined them in the elevator without so much as acknowledging their presence. That is not the way to make guests feel welcome.

Stepping off the elevator when I arrived, I noticed lots of fingerprints, handprints, nose prints, and worse on the windows and mirror of the 18th floor elevator lobby. It was the weekend and a fair number of kids were in the hotel, so I didn’t think much of it at the time. However, those smudges and more were still there when I left four days later; they’d never been cleaned. Housekeeping was in that area every day; cleaning the windows and mirrors should be part of their regular routine.

Upon checking into my room, I saw that the housekeeper had missed several chunks of pretzel the previous guest apparently dropped right in the middle of the living area. The pieces were so obvious that it made me wonder whether the room had been vacuumed at all.

Wine glasses and room service trays that were sitting outside a nearby room on the evening I arrived were still there the next morning, more than 12 hours later. A housekeeping cart was parked in the hall next to a guest room for an entire day. Because there were no housekeepers in sight and no rooms being serviced, it made the hall feel like a storage closet.

After I returned home, I contacted the hotel’s general manager to discuss my concerns. He said he “completely agreed” with my assessment of the guest rooms’ condition, and told me the hotel was in the process of finalizing a $10 million guest room renovation design, which will commence this fall.

Depending on the extent of the renovations they’re planning, even the space issues could be remedied. Boston’s Colonnade Hotel underwent a $20 million renovation in late 2007 that included taking every room down to the foundation and rebuilding them to include new walls, ceilings, electrical, and windows.

The G-M was also quite concerned about the “less than gracious hospitality” I received during my stay and apologized, saying “The Hilton Portland and Hilton Worldwide pride ourselves in providing the highest level of guest service and I truly regret we failed to demonstrate this to you during your stay.”

Given his responsiveness to my inquiries, I expect that the staff issues have already been addressed, but the room renovation is still several months away.

If you’re considering the Hilton Portland & Executive Tower, I would recommend the Executive Tower until after the fall room refurbishment is complete.