on July 03, 2012
It was somehow fitting that the Victoria Clipper, the high-speed catamaran that plies the waters between Seattle and Victoria, B.C., turned 26 years old on Canada Day this year.

More than a quarter century after its maiden voyage, “The Clipper” has become the term for a fleet of three twin-hulled catamarans that ferry passengers between Seattle and Victoria, the San Juan Islands, and on whale-watching excursions.

In 1986, the company started with a single vessel it had built to fill a niche that was being created. 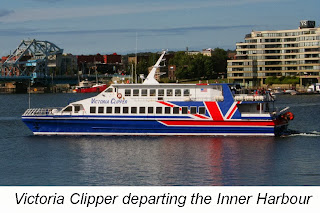 When I moved to Seattle in 1983, the only ship operating between Seattle and Victoria was the Princess Marguerite II or the Maggie, as locals called her – a classic steam ship built in 1949 for the Canadian Pacific Railway specifically to sail the Seattle-Victoria-Vancouver triangle.

She was an elegant, if time-consuming, way to travel between the two countries; her maximum speed of 23 knots meant a four-hour trip each way between Seattle and Victoria.

In 1985, a hydrofoil built by the Boeing Marine Company called The Sprit of Friendship, made its appearance. With a top speed of 50 knots and an interior more like an airliner than a sailing ship, it offered a dramatically shorter travel time.

It was not to last.

On Sept. 18, little more than three months after its debut, Federal marshals seized the vessel upon its return from Canada for what Boeing called operator Island Jetfoil’s “failure to meet its contractual obligations.”

Seeing a window of opportunity, Clipper Navigation was formed.

The company contacted with Fjellstrand AS of Omastrand, Norway to construct the first Victoria Clipper, and the single catamaran began passenger-only operations between Pier 69 in Seattle and Victoria’s Inner Harbour on July 1, 1986.

I can’t remember exactly when I took my first trip on the original Clipper, but it was early in its existence and I fell in love with it immediately. How civilized to be able to sit back, relax, read, have a little something to eat and drink, and arrive in Victoria early enough to enjoy a full day ashore!

While the Clippers’ interiors resemble an airplane more than a cruise ship, there are far fewer restrictions on movement within the cabin than in an airplane (at least when the seas aren’t an issue), so it’s no problem to walk about, stretch your legs, and even get some fresh air on the outside deck.

In addition, the Clippers’ terminal at the Inner Harbour is steps away from the heart of the action, making it unnecessary to rent – or buy fuel for, or park – a car.

As an extra bonus, the Clipper offers a range of duty-free items. On our most recent trip, we purchased 1-liter bottles of Maker’s Mark and, being summer, Jose Cuervo Gold for margaritas. At $22.50, the Maker’s Mark was about half the price I’d pay at retail in Washington state, so it represented a substantial savings.

Day trips are easy via the Clipper. A 7:30 a.m. departure coupled with a 6:45 p.m. return gives travelers about eight hours to enjoy the city, while getting back to Seattle at the reasonable hour of about 10:00 p.m., including the time necessary to clear U.S. Customs.

Two parking garages near Pier 69 provide parking to Clipper passengers for $10 per calendar day, so for a convenient, quick, and economical trip to Victoria, B.C., I heartily recommend the Victoria Clipper.