on April 25, 2012
The vaunted Four Seasons hotel chain will be opening the Four Seasons Baku, in the capital of Azerbaijan, on 15 June 2012.

A hub for oil production for centuries, the capital city of Baku has recently emerged as a cultural destination with dozens of museums and performing arts venues.  Now, exactly a year after opening its hotel in Marrakesh, Morocco, the Four Seasons will debut its signature service in this city on the Caspian Sea.

As you can see in the view from the Presidential Suite above, the hotel is located on the city's waterfront. The Beaux-Arts Four Seasons Baku features easy access to the Old City, with attractions like the Fire Temple below, just steps away. 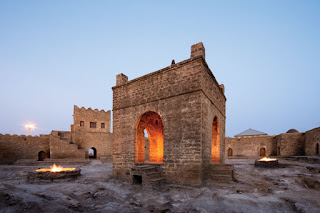 The hotel offers plenty of creature comforts, including what is billed as "A feast of international and regional flavours" at two restaurants, a lounge, and two bars, which promotional materials say "set a new scene for stylish dining and drinking in the Azeri capital." 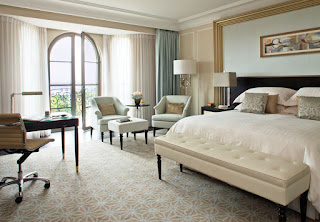 As of this writing,  a "Superior Room" with one king bed will cost AZN300 (Azerbijani New Manat) or, at this writing, US$382 per night. At 532 square feet, room size is quite generous compared to many U.S. hotels, let alone the generally-smaller rooms in European facilities.

Based on the photos, the description, and consistently delightful Four Seasons' service, this property should be delightful indeed.