on March 08, 2012
Hoping to stimulate mileage purchases, Alaska Airlines is offering a bonus of up to 40 percent through April 15 for Mileage Plan™ members who purchase miles, either for themselves or as a gift.

"We anticipate most customers will use the purchased miles to top off their account for an award ticket," Komal Ram, manager, partnership marketing & loyalty communications told me in an email. "We hope the bonus miles will also offer an incentive to purchase miles for gifts as well."

While Ram tells me the promotion has been posted on the airline's web site since its March 1 launch, I learned of it when the airline sent Mileage Plan™ members this e-mail announcing the deal on March 8. (Click on the image to view larger size.) 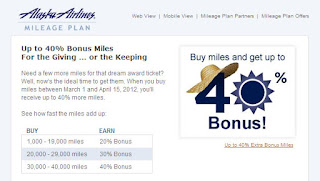 Alaska sells additional Mileage Plan™ miles at $27.50 per 1,000 miles, plus a 7.5 percent federal excise tax. Compare that to United, which sells MileagePlus® miles at $35 per 1,000 miles plus tax, and it immediately appears Alaska is offering a better value.

Clearly, the greatest additional value would be realized when buying enough miles to earn the top-tier bonus. That requires a purchase of at least 30,000 miles, and would garner 12,000 additional bonus miles, for a total of 42,000 miles. The total cost would be $886.88 ($825.00 plus 7.5 percent federal excise tax), which works out to a purchase price of 2.11¢ per mile, considerably lower than United's rate above, which works out to 3.8¢ per mile. Obviously, Alaska's current offer of bonus miles help reduce the per-mile cost.

More impressive, however, is the value received when actually using those miles.

Because it’s a route I’ve flown recently, I decided to see how much it would cost to fly from SeaTac to Reagan National Airport for the weekend of May 4 – 7.

On the morning of March 8, several flights were available for 40,000 miles, plus a $5 processing fee.

Comparing these tickets to what they would cost when paying cash is the only meaningful way to determine the actual value of the miles you’re using. In this case, I was pleasantly surprised by how much value my miles would buy.

Depending on which of two outgoing flights I chose, there were two different prices for a non-stop round trip: $618 or $841.

Remarkably, that means the Mileage Plan™ miles would be worth either 1.5¢ if used for the cheaper flights or ...wait for it... 2.1¢ if used for the more expensive ticket – almost exactly what one would pay to purchase those miles!

Granted, this is only one example and, as I said at the beginning, you’ve got to do the math to know if it makes sense for you and your travel plans. And without getting the 40% bonus miles, the math will work out differently.

However, it supports the very positive impression I have of Alaska Airlines and the value it strives to deliver to its customers.

But it forces me to revise what I said in an earlier post.

And sometimes, under the right circumstances, it can even be economical to purchase them outright.