on February 22, 2012
About a year ago, I visited The Oyster Bar in Bow for the first time in years. When I returned over the President's Day weekend, I found that things hadn't changed much since my last visit. That is both good and not so good.

Returning from a weekend in Vancouver, B.C., we took a detour for lunch at The Oyster Bar, a little place near the town of Bow, overlooking Samish Bay and the San Juan Islands beyond. My wife and I had been to The Oyster Bar perhaps 20 years ago so it was nice to return together. 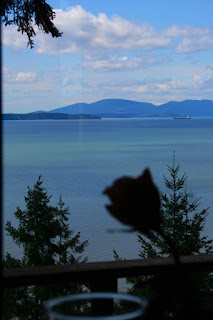 The restaurant has been there since the ‘20s and the view is as spectacular as always. As an added bonus, the restaurant is configured so that every table in the place enjoys the same panorama.

My wife and I were seated promptly in a dining room that was very quiet. Though there were diners at about three other tables, it was obvious the lunch rush had passed.

Our server came quickly and brought the wines we'd ordered as we were still perusing the menus.

In a seafood mood, we opted to start with the steamed mussels with white wine, pistou, and grape tomatoes. We also ordered a mixed seasonal green salad and the daily special of the cedar-planked mahi mahi, which we would split. We then nibbled on the warm rolls while we waited.

I don't want to rush someone who is preparing shellfish; I'd rather they take the time to ensure it's done correctly. However, it seemed to take an awfully long time for a simple order of steamed mussels, especially considering how quiet the place was.

When the mussels finally arrived, they were absolutely delicious! Piping hot broth cradled the mussels, which were perfectly cooked without a hit of rubberiness that comes from overcooking. In fact, once the shellfish were gone, we continued to slurp the broth, either with our soup spoons or by dipping more rolls into it. Either way, it was too good to leave alone!

The salad followed and it, too, was a delight. Mixed seasonal greens with toasted walnuts, bleu cheese, red onions, gala apples and red grapes, dressed with a maple vinaigrette. What's not to love?

Finished with the salad and anticipating a couple more hours behind the wheel, we decided not to indulge in a second glass of wine. Instead, we sat back and waited for our entree.

By the time the mahi mahi came, the rest of the meal had settled and I could quite easily have done without the main course. However, we each tucked in and, of course, found it delicious. Again, perfectly prepared: neither undercooked nor overcooked, piping hot, perfectly seasoned, served fresh.

And much, much too late.

As I reported in my previous post, The Oyster Bar's one drawback is the speed of service.

While very gracious, it was far slower than it should have been. Try as they might, they still don't have the rhythm that a fine-dining restaurant should have. Having worked in such a restaurant, I realize it's a balance between bringing out the courses promptly -- but not so quickly that the diners feel rushed.

In the case of The Oyster Bar, they allow far too much time between courses, which I have to believe actually works against them.

Despite that, I'm sure we'll return, though it will have to be a day when I have both an abundant appetite and reserve of patience. The food is excellent, but I'd like it to come when I still have both room enough and the proper attitude to enjoy it.