on December 14, 2011
I often joke that my idea of roughing it is staying at a Hampton Inn between Hiltons. My recent stay at the Hampton Inn at Portland’s airport wasn’t roughing it at all.

I recently spent a night at this Hampton Inn while attending a meeting at the hotel next door and found it to be a generally delightful experience.

The desk clerk who checked me in was very pleasant and efficient. She’d noted the preferences in my HiltonHHonors profile and placed me in a room on the top floor.

However, walking through the halls - first to the elevator then from the elevator to my room - I felt a knot growing in my stomach. The halls seemed a bit worn and dingy, and I worried that my room would have the same character. 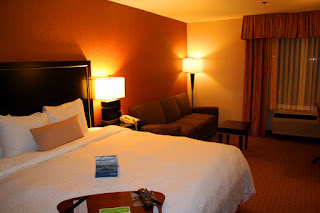 I needn’t have. The room had obviously been updated recently and was lovely, down to that freshly laundered duvet the placard in the elevator had boasted about.

The room included the usual amenities including flat-screen TV, free wireless Internet access, a work desk, a sitting area, a laptop desk (for using your laptop while sitting up in bed), iron and ironing board.

The bathroom amenities included something I’d not seen offered before in a hotel: earplugs. Perhaps this Hampton Inn includes these little sleep aids because of its location just south of the airport’s north runway. Missing, however, was the ubiquitous shower cap. But c’mon; when was the last time anyone under, say, age 70 actually used a shower cap as a shower cap?

Breakfast in the morning was a typical free breakfast: omelets, bacon, sausage, and other items on steam tables accompanied by fruit and yogurt and, for the ambitious (or carb-addicted), a make-your-own waffle station. As an alternative, Hampton Inns also offer “grab-and-go” brown-bag breakfasts – a nice option if you’re in a hurry.

The breakfast area and the lobby had obviously also been recently refurbished, so it appeared that the hallways – the only spot that was in any way sub-par – were left for last.

Because the hotel is situated just south of the airport’s north runway, rooms on the north end of the hotel actually have views of the approach end of Runway 28 Left (or the departure end of Runway 10 Right). Because I’m such a big aviation fan – and knowing that flights into PDX usually land to the west (approach end of 28L), I’d definitely have requested one of those rooms if I’d known about them before visiting. If you’re not a fan, there are plenty of rooms that don’t face the flight line.

All in all, I would recommend the Hampton Inn at PDX without hesitation.