UNITED AIRLINES: Can I Just Vent for a Minute?

on November 13, 2011
Once again – no, actually TWICE again -- United Airlines (NYSE:UAL) has demonstrated that it is utterly inept when it comes to customer service.

I’m not talking about monumental screw-ups, such as those that lead to the legendary “United Breaks Guitars.” (If you've never seen it, you must watch the video!) I’m talking about “misses” that touch the average traveler every day.

Right now, I’m sitting at DEN, waiting for a connecting flight to STL and have already been the victim of two rather dramatic misses.

United has begun offering a United MileagePlus Explorer Card. For an annual fee of $95, this card offers a free checked bag (for up to two people traveling together), miles for every dollar spent, two club passes per year and – important to me – priority boarding. 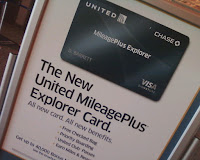 I carry the United MileagePlus Club Card. For an annual fee of about $375, I get miles for every dollar spent (sometimes more than one mile per dollar), access to United Clubs and U.S. Airways clubs, and do not pay foreign transaction fees. Notably, however, I do NOT get a free checked bag or priority boarding, even though my annual fee is almost $300 more than the Explorer Card (pictured at right).

Of course, I get club access which I consider valuable. But I can’t imagine another scenario in the retail world where spending more actually gets you less.

In this case, my position is that the MileagePlus Club Card should get all the other perks of the MileagePlus Explorer Card plus club access. What’s more, the rep at card issuer Chase Bank whom I called (because I couldn’t believe it when a United gate agent told me I was s.o.l.), agreed with me. These are both MileagePlus VISA cards, after all. “Spend more” SHOULD mean “Get more.”

The other United lapse involved Economy Plus. My company bought basic economy class passage but, as anyone who travels with a laptop knows, it’s almost impossible to even open the laptop, let alone get anything done in flight in what I lovingly call “steerage.”

So I paid $88 to upgrade to Economy Plus. In addition to a bit more laptop (and leg) room, I reasoned I would have also bought earlier boarding.

Because I chose an aisle seat, I was in group 4. The LAST group to board, behind First Class, United Platinum, Gold, Silver, Tin, Aluminum, and Zinc frequent flier members, and those needing “special assistance,” including the elderly and those with rugrats.

Not that I begrudge them. But what I do begrudge is once again paying more for less. And in this case, the “less” is less room in the overhead bins. I have traveled to Europe without checking, and I sure as hell didn’t want to check a bag from Seattle to St. Louis. But being in group 4, there was a pretty fair chance the overhead space would be gone by the time I boarded and that I’d have to check.

Fortunately, I didn’t, but I can hear the United spin doctors now: “Sir, you had the option to pay another $44 for Priority Boarding.”

Give me a break.

I’m already paying considerably more each year for your credit card AND I spent more for a seat in Economy Plus. Asking me to pay even more at this point is like asking a customer who chose the more expensive wool blazer instead of polyester to pay extra for buttons.

They ought to come with the coat. Which actually reminds me of a similar experience.

Some years ago, I bought two suits at Men’s Wearhouse. The salesman irritated me from the beginning by talking to my wife as though she was the one buying the suit instead of talking directly to me, the business professional who was going to be wearing them and the one who needs to be happy with his purchase.

But the coup de grace was delivered at check-out when the cashier presented a bill for the alterations.

I had never bought a suit before that didn’t include the alterations, though I acknowledge I’d bought my other suits from places like Nordstrom, Nieman Marcus, and the now-defunct Bullock’s rather than a discounter, but that chapped my hide so badly that, upon delivery, I took advantage of their money-back guarantee, returned the suits, and have never shopped there again.

Why? Not because of what I consider the screw-up of the salesman treating me like a kid whose mother was buying him a suit but because, when I called the chain’s main office to report these incidents, NOBODY APOLOGIZED. They simply said it was their policy to charge for alterations (I’d figured that out on my own by that time, thanks), and, “Your experience with the salesperson was indeed unfortunate. We do hope you’ll give us another try; I’m sure we’ll meet your expectations next time.”

Surprise. There was – and will never be – a “next time” for Men’s Wearhouse. Because the needs of business travel often dictate which airline I fly, I am sincerely sorry I won’t be able to say the same thing to United Airlines.