Confessions of a Cruise Virgin

on August 24, 2011
I now understand why author Alex Haley would go to sea to write: the salt air and the solitude.

Because I am writing this aboard a cruise ship that is carrying more than 1,400 fellow passengers and a crew of 600, you may think this an unlikely epiphany. However, moments ago, I found myself quite pleasantly alone with my thoughts on the Sky Deck of the ms Volendam, the newest ship in the Holland America line to ply the waters of the Inside Passage between Vancouver, British Columbia and Alaska. 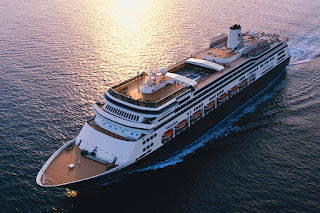 My awakening includes the shattering of some other preconceived notions about onboard life:

You'll gain weight. Not necessarily. I considered it my duty to experience all the dining venues the ship has to offer (a tough job, I know, but someone has to do it). I found the cuisine to be widely varied, yet uniformly delightful.

For lunch today I chose a salad of asparagus tips and cherry tomatoes on a bed of greens with a small portion of thinly sliced, smoked chicken breast topped with vinaigrette dressing. A cup of spicy Santa Fe Tomato soup with a couple of rye rolls and I was thoroughly satisfied, much to the amazement of my server, who kept pointing out the fine entrees of which I was depriving myself.

Meals are included in the cost of the cruise, as are between-meal snacks, 24-hour room service, and the midnight buffets, so it is certainly possible to eat yourself silly, but it's your choice. Also, with a state-of-the art gym including personal trainers, a sauna and steam room to work off excess calories, weight gain need not be a foregone conclusion.

You'll be cut off from the outside world. False, although that could be either good news or bad news. Every cabin has a telephone with ship-to-shore capabilities, allowing you to talk all you want at about $8 a minute. The Volendam even has a first-of-its-kind Internet Café featuring eight state-of-the-art terminals that, via satellite link, enable us workaholics to stay in touch via e-mail, or surf the Internet at 75-cents a minute. The Café, where I'm writing this column, looks like the busiest room on the ship - at least until the disco opens later tonight.

The average age of your fellow passengers will be between 65 and dead. If that was ever true, it's not any more; the clientele aboard cruise ships has a very broad age range. Today's ships offer activities for all ages, from an on-board library to the Internet Café; from Broadway-style shows to recent movies in the ship's theatre; from shuffleboard to tennis courts; from karaoke to sing-alongs in the piano bar. Holland America's ships even carry youth directors, offer planned activities targeting tykes to teens, and a young people's program dubbed "Club HAL."

You'll be pampered. True. Both the cabin and restaurant staffs are delightful: attentive without being intrusive, and always very efficient. This morning, for example, I took a mile-and-a-half walk around the deck, then a sauna and a shower in the gym. By the time I returned to my cabin, the bed had been made up and the room tidied.

So far, I've ordered room service three times. Each time, they promised it would "be there within 30 minutes." Only once did they take to full half-hour; the other two occasions, my order arrived in 15 minutes.

You'll be cramped. False. The publicity materials say the Volendam's cabins are 25-percent larger than other ships in the same class. I can't vouch for that figure, but my "large outside stateroom" has a queen bed, a love seat that would fold out to a hide-a-bed if I was inclined to put more than two people into approximately 200 square feet, a small desk, closet space, and (uniquely, I'm told) a full bath with tub and shower.

The mantra of the cruise industry today seems to be "bigger is better:" bigger ships, bigger cabins, bigger passenger complements. Which brings us back to the topic of solitude.

The cabins are arranged to maximize the amount of public space, both inside the ship and on the open decks. Several lounges provide the opportunity to sit, read, and watch the passing sights, which is an absolute must when sailing the Inside Passage and seeing sights like Ketchikan, Juneau, the Mendenhall Glacier and Glacier Bay, and Skagway.

If you're hearty enough, there's plenty of space outside on the Promenade, Lido, Sports and Sky decks. And, if you're well heeled enough, you can also survey the passing tableau from your own private verandah.

A cruise is expensive. While cruising would probably not be considered an "economy" vacation, it can be quite economical, considering that meals and a number of different types of entertainment are included in a single price.

Published rates for a seven-day cruise on the Volendam, depending on the size of the stateroom and the time of the season, ranged from $1,299 per person for an inside cabin to $7,145 per person for the 1100-square-foot penthouse at the beginning of the season. Mini-suites, the smallest cabins with private verandahs, ranged from $2,938 to $3,965 per person. Remember to double that if two people are traveling together.

But at this time of year, when the Alaska cruise season is winding down, there are deals to be had. If you're able to travel on short notice, check out the web site of several cruise lines. You might be pleasantly surprised...and perhaps soon will be writing your own "confessions."