on May 03, 2011
One recent morning on a day that threatened to be sunny, I decided to hop a ferry and enjoy breakfast on Bainbridge Island.

It had literally been years since I ate at the Streamliner Diner in Winslow, so I was pleased to learn it had stood the test of time and was still open. But things do change, so I’m happy to report that the food is both as inventive and as delicious as I recall.

This little restaurant isn’t in really a diner as the name implies. For about the last 35 years, it has occupied a spot in a nondescript little building on Winslow Way, a couple of blocks west of Highway 305 and is subtly signed, so you have to watch and read the signs or you might miss it.

Which would be a shame. 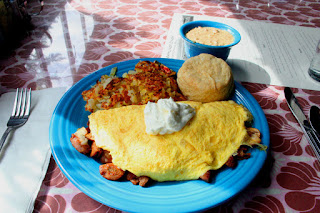 I arrived rather late for a member of the breakfast crowd – about 10 a.m. – but was greeted and seated quickly. Looking over the menu and the “specials” board, I decided to have the special omelet: Mango jalapeno sausage omelet with roasted red peppers, mushrooms, and jack cheese. It was offered with onions, which I asked them to hold. For my bread, I chose the biscuit and requested a side of gravy to top it off.

The breakfast came quickly – possibly because I had missed the crowds – but unfortunately my request to hold the onions had not been honored, so I set about picking them out as they were easily recognizable and just as easily removed.

My waitress noticed what I was doing and came right over to ask if everything was all right. When I told her that the onions had not been held as requested, she immediately offered to have the kitchen remake it. I assured her that wasn’t necessary, but it was certainly a welcome gesture and indicative of the general level of service.

Other than the onion issue, the omelet was quite tasty. The sausage had a bit of kick to it but was not overwhelming. The cheese was tasty and, importantly, applied with a deft hand. No sense drowning the thing in too much melted goo.

The sausage gravy was also pleasantly peppery and was probably the best biscuit gravy I’ve had in quite a while.

All in all, my most recent experience confirmed my pleasant memories of visits past. I’ll definitely be returning.