on December 07, 2009
My wife and I stayed at the Sheraton Grand Hotel for five nights while visiting the kids over the Thanksgiving holiday. It was only OK; our previous experiences were better.

Built around the restored façade of what used to be Sacramento’s Public Market, the Sheraton Grand is smack in the middle of downtown at 13th and J Streets, which is both a positive and a negative. It’s convenient to many destinations including the State Capitol, the Sacramento Convention Center, a shopping mall, and a number of restaurants. The location is fine during the day but the area can get pretty deserted at night, save for what we call the area’s “colorful characters.” 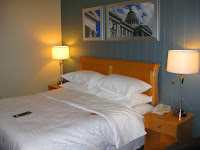 Our standard guest room on a Club Floor was just that: a standard room with the usual amenities including a large flat-screen TV. The best part was the Sheraton Sweet Sleeper bed, which was quite comfy. On the down side, the bathrobes provided were stiff and quite scratchy (has the laundry never heard of fabric softener?) and the towels were among the thinnest I’ve seen in a hotel of the Sheraton Grand’s caliber.

The hotel offers a restaurant, complimentary internet access from three computers located near the restaurant, a bar/lounge, room service, an outdoor pool, a well-equipped fitness center, a sundries shop, and meeting space for those who need it.

Which included some of the guests on our floor. One morning, we were awakened by what sounded like a children's choir practice coming from a guest room down the hall. It was quite clearly being led by an adult who should have known better and sought out a more appropriate practice space.

Call me a curmudgeon but I don’t believe children belong on Club Floors; those floors should be exclusively for couples or solo travelers who shouldn’t have to deal with being awakened or kept awake by noisy kids. And with 26 stories in this hotel, it’s not as if there were no other options.

The breakfast buffet served at the restaurant on the mezzanine offered a wide variety of tasty items. And on weekdays, the chef made eggs to order rather than letting a batch of scrambled eggs get rubbery on the steam table – a nice touch, I thought.

The rest of the breakfast crew, however, needed more polish. The servers who offered coffee and juice when we sat down were often nowhere to be found when it came time to refill the coffee cups. And although we told the host or hostess that we had a coupon for the breakfast (included in our room rate) that information never seemed to get to our server. Every time, they brought a bill that subsequently had to be cancelled.

Evenings in the lobby lounge were quite pleasant with bartenders David and Trish serving up both drinks and conversation.

The hotel offers valet parking as well as self-parking at the garage across the street. The self-parking charge is $18 per night – a bit high considering that it’s only Sacramento. Nonetheless, there really isn’t much of an alternative except parking on the street, which means moving your car or feeding the meter before 8 a.m.

My overall negative feelings about our most recent stay stem from one thing: service.

The service had clearly slipped from what we’d experienced during previous visits. From the blasé attitude of the breakfast crew to housekeeping that sent a towel when we’d requested a robe to the kids on a Club Floor to the fact that Sheraton only opens its Club Lounge three evenings a week – Tuesday, Wednesday, and Thursday – the Sheraton Grand lacked the “grandness” we’d come to expect.

With other nice hotels in the area, including the newer Citizen Hotel just three blocks west, the Sheraton Grand needs to step up its game if it intends to stay competitive.