on October 25, 2009
Summer time (Europe's label for Daylight Saving Time) ended in the wee hours of October 25, the last Sunday of my recent trip to Amsterdam and London. As a result, I was up far too early that morning, but I made good use of the time. 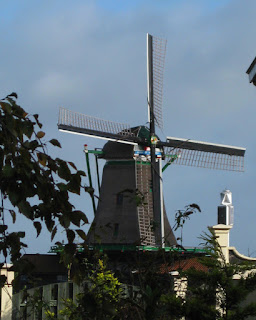 I hopped on the tram for a quick trip to Amsterdam Centraal (Central Train Station) where I caught a "sneltrein" ("fast train") to Zaandam, about 15 minutes north of Amsterdam. Zaandam is the home of many traditional Dutch windmills -- the photogenic kind, not the power-producing wind turbines which are also ubiquitous in Holland.

Unfortunately for the sake of the photographs, I could only get really close to one of them. Nonetheless, I was able to get some nice shots during those fleeting moments when the sun peeked through the clouds.

In addition to the windmills, the Zaandam area is home to at least two (Dutch) cocoa plants, so the air carried the delightful smell of chocolate! There's also a History of Chocolate museum close to one of the plants but establishments in that area don't open until at least 1100 on Sundays (they use the 24-hour clock here) and, as I was there fairly early, the museum was still closed.

Upon my return to Amsterdam, I decided to have a bit of lunch at the Haringhandel (literally "herring trade"; colloquially, a herring stand). Haringhandels sell herring in all its varieties: raw, plain, smoked, pickled, with spices, etc. You can get a fish fillet by itself or served on a broodje (roll), with onions and/or dill pickles. It was very interesting, but also very salty.

Still, as Monty Python once said, "What's the point of going abroad if you're just another tourist (having a) bowl of Campbell's Cream of Mushroom Soup, the first item on the menu of international cuisine?"